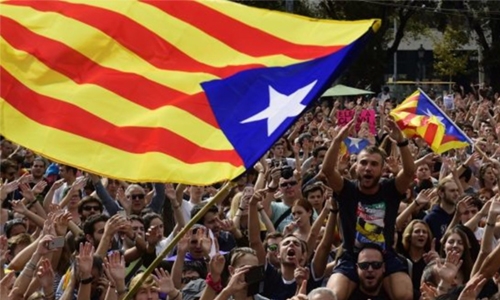 Spain’s protest-hit northeast was gripped by a general strike yesterday as thousands of “freedom marchers” converged on Barcelona for a mass show of dissent over the jailing of nine Catalan separatist leaders.

With the angry demonstrations entering their fifth day, activists blocked a string of roads in the wealthy northeastern region, cutting off the main cross-border highway with France.

Workers were also downing tools against Monday’s Supreme Court verdict in which the separatist leaders were handed long jail terms over a banned referendum and an abortive independence declaration two years ago.

As well as the strike, tens of thousands of people streamed into Barcelona after a three-day march from five Catalan towns in a bid to cause chaos on the roads in a region that accounts for about a fifth of Spain’s economic output.