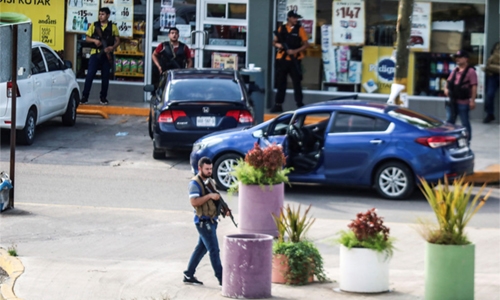 Heavily armed cartel fighters surrounded security forces and made them free one of drug lord Joaquin ‘El Chapo’ Guzman’s sons, whose brief apprehension triggered intense gunbattles across the city of Culiacan. Security Minister Alfonso Durazo said a patrol by National Guard militarised police first came under attack from within a house in the city, 600 km (370 miles) northwest of Mexico City.

After entering the house, they found four men including Ovidio Guzman, who is accused of drug trafficking in the United States. The patrol was quickly overpowered by cartel gunmen, however, and the decision was taken to withdraw to protect the lives of the National Guard and restore calm in the city, where gangsters had set up roadblocks and were unleashing heavy automatic gunfire, Durazo said.

“The decision was taken to retreat from the house, without Guzman to try to avoid more violence in the area and preserve the lives of our personnel and recover calm in the city,” Durazo said.