With Trump, Modi set to fire up Houston rally | THE DAILY TRIBUNE | KINGDOM OF BAHRAIN 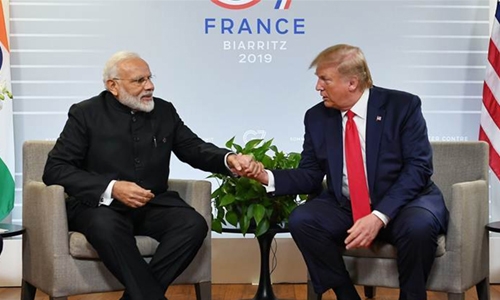 With Trump, Modi set to fire up Houston rally

With US President Donald Trump by his side, Indian Prime Minister Narendra Modi will seek to fire up thousands of Indian-American supporters at a rally in Texas on Sunday. Modi is travelling to the United States to speak at the UN General Assembly. Before travelling to the United Nations headquarters in New York, Modi will address a rally at a stadium in Houston that Trump has also agreed to attend.

“The special gesture of President @realDonaldTrump to join us in Houston highlights the strength of the relationship and recognition of the contribution of the Indian community to American society and economy,” Modi said in a Tweet. Though there have been recent tensions between Washington and New Delhi over trade and tariffs, the two men have shown a warm personal rapport at previous meetings.

About 50,000 people have registered for the “Howdy, Modi” community event, at which Trump will also speak, the biggest crowd that the Indian leader has drawn after a rock-show like rally at New York’s Madison Square Garden in 2014.

Vijay Chauthaiwale, the chief of the BJP’s foreign affairs department, said from Houston that Trump’s decision to attend the event was a surprise, but testified to the power of the US Indian community as well as the importance Trump attached to bilateral ties, despite recent trade frictions. “The strategic relationship is stronger,” he said.

Modi’s supporters say he has won a diplomatic victory by getting Trump on his side. “They’ve developed quite a good camaraderie between them, leaders of the two most influential democracies on earth,” said Shalab Kumar, an Indian-American businessman who founded the Republican Hindu Coalition, modelled on the Republican Jewish Coalition, in 2015. “They’re finally coming together on one stage, that’s great particularly after abrogation (of Kashmir’s special status).

This is probably the biggest endorsement of the United States to Modi, that the move was the correct move.” In a statement confirming Trump’s attendance in Houston, the White House said the president would discuss with Modi ways to deepen the two countries’ energy and trade relationship.