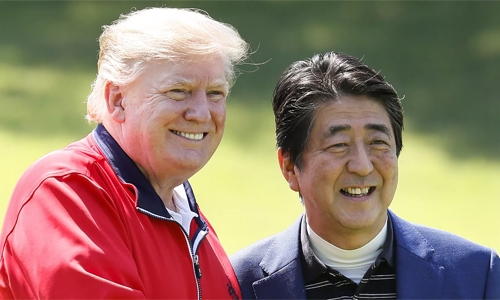 Japan’s Prime Minister Shinzo Abe heads to Iran this week on a rare diplomatic mission Japanese government officials say Abe will not present Tehran with a list of demands, or deliver a message from Washington, and instead want to position Japan as a neutral intermediary.

That could prove useful, said Michael Bosack, special adviser for government relations at the Yokosuka Council on Asia-Pacific Studies. Abe will meet President Hassan Rouhani and the country’s Supreme Leader Ayatollah Ali Khamenei on the June 12-14 trip -- the first time a Japanese prime minister has visited Iran since 1978, a year before the country’s revolution. Iranian commentators said Abe could ferry messages between the two sides.

Efforts this year to resolve a long-running standoff with Russia over a string of disputed islands have run aground. And Japan has also found itself out of the loop on perhaps the most pressing diplomatic challenge in its backyard: North Korea. Abe “needs a diplomatic stunt as he faces an impasse on Russia and North Korea,” said Tetsuro Kato, political science professor at Tokyo’s Waseda University