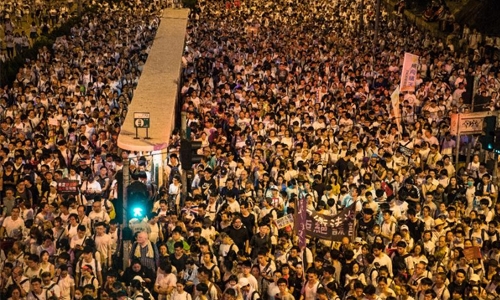 China yesterday strongly backed the Hong Kong government on a controversial bill that would allow extraditions to the mainland, and voiced opposition to “outside interference” following a massive protest against the legislation. Organisers said more than a million people marched against the law, bringing central Hong Kong to a standstill at the weekend as the semi-autonomous city’s pro-Beijing government battles a major political crisis.

Critics of the proposed legislation say it would erode precious freedoms in the city, and leave dissidents at the mercy of Beijing’s opaque justice system. Beijing was unmoved by the protest, with foreign ministry spokesman Geng Shuang saying it “will continue to firmly support” the Hong Kong administration. “Second, we firmly oppose any outside interference in the legislative affairs” of the city, he said at a regular press briefing, adding that “some countries have made some irresponsible remarks about the amendment”.

Chinese state-run media earlier slammed the Hong Kong protest organisers for “collusion with the West”, and pointed to meetings between Hong Kong opposition figures and senior US officials. The Chinese-language edition of the nationalistic Global Times dismissed Sunday’s mass demonstration, one of the biggest shows of public anger since Hong Kong was returned to Chinese rule in 1997.

“It is very noteworthy that some international forces have significantly strengthened their interaction with the Hong Kong opposition in recent months,” the paper said, describing the exchanges as “collusion”. The editorial pointed to meetings between Hong Kong opposition figures and US Secretary of State Mike Pompeo, as well as House Speaker Nancy Pelosi.