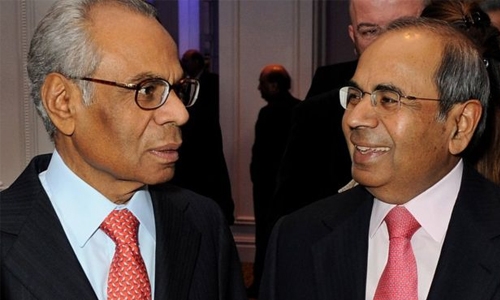 The Hinduja brothers are once again the wealthiest people in Britain, according to The Sunday Times newspaper’s Rich List 2019. London-based Sri and Gopi Hinduja, of the sprawling Hinduja Group of companies, have a fortune worth £22.0 billion ($28.6 billion, 25.5 billion euros), up £1.4bn on last year. The Indian-born brothers previously topped the respected annual Rich List, which ranks the 1,000 wealthiest people in Britain, in 2014 and 2017.

Jim Ratcliffe, the boss of petrochemicals firm Ineos, fell from first place to third after a reported £2.9bn drop to £18.15bn. The list features a record 151 sterling billionaires with a combined wealth of nearly £525 billion -- a 9.2 percent rise on last year. Inventor James Dyson reached his highest-ever position as he prepares to move Dyson’s head office from England to Singapore. The Brexit-backing businessman climbed seven places to become the fifth-richest person in Britain with an estimated £12.6 billion.

Queen Elizabeth II’s personal wealth -- as apart from that tied to the crown -- remained at £370 million, making her the joint 356th-richest person in her kingdom. “We take the view that the Crown Estate belongs to the state and is not a personal asset,” The Sunday Times said. “Were it to be counted (as it once was), it is most likely that the queen would still sit at -- or be very close to -- the top of the Rich List, a position she occupied from 1989 to 1994.” The sovereign is the 17th-wealthiest aristocrat in Britain, with the Duke of Westminster and the Grosvenor family coming top with £10.1 billion.

They own 300 acres (120 hectares) of prime central London. The 28-year-old duke topped the young rich list of people under 30, which included singer Ed Sheeran in fifth place with £160m -- the highest without inherited wealth -- golfer Rory McIlroy sixth with £138m, footballer Gareth Bale seventh with £94m and actor Daniel Radcliffe eighth with £90m. Footballer Sergio Aguero and singer Harry Styles rounded out the top 10 with £58m. Britain and Ireland’s wealthiest rock star fortunes are those of Paul McCartney and his wife Nancy Shevell (£750m), U2 (£583m), Elton John (£320m) and Mick Jagger (£275m).

The Sunday Times said that after a year of turmoil on the stock market, the super-rich now feared the prospect of the main opposition Labour Party coming to power and forming a hard-left government. It said they were planning to pull billions of pounds out of Britain in the event of Labour leader Jeremy Corbyn becoming prime minister.

Prime Minister Theresa May’s “zombie government has convinced many of Britain’s wealthy that an ardent Marxist is now within touching distance of Downing Street,” the broadsheet said. “We have spoken to individuals on this list who are now moving family trusts overseas and arranging for properties to be owned by offshore entities.”