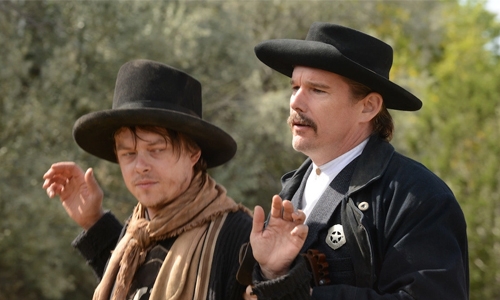 The Kid is a 2019 American semi-biographical western action film directed by Vincent D’Onofrio, from a screenplay by Andrew Lanham, and is executive produced by Carl Stubner, through Suretone Pictures. The film stars Ethan Hawke, Dane DeHaan, Jake Schur, Leila George, Chris Pratt, Adam Baldwin, and D’Onofrio, and centers around Rio Cutler who forms an unlikely alliance with local sheriff Pat Garrett and infamous outlaw Billy the Kid in a mission to rescue his sister Sara from Grant Cutler, the boy’s thuggish uncle and gang leader.

The Kid spins the classic Western tale forward by focusing on a child’s role in the Billy the Kid saga, but its ingenuity begins and ends with the duality of its title. We begin as young Rio (Jake Schur) kills his abusive father and makes off with his older sister Sara (Leila George), en route to Santa Fe. Along the way, they wind up caught in a standoff between Billy the Kid (Dane DeHaan) and sheriff Pat Garrett (Ethan Hawke). Rio is taken with the bad boy gunslinger, already notorious, and he joins the caravan as the sheriff escorts Billy to New Mexico.

DeHaan, whose boyish looks have always recalled Leonardo DiCaprio, has a grimy charisma as Billy, but Garrett is the far more interesting character here, thanks to the quiet nuance of Hawke’s portrayal. Schur’s Rio is left behind by a script that is unsure where to put its focus. Chris Pratt shows up as Rio’s menacing uncle Grant, giving a blank performance underneath a thick beard. (Both Pratt and Hawke co-starred with D’Onofrio in 2016’s “The Magnificent Seven,” where they probably made a regrettable pact to make this film together.)

“The Kid” manages some picturesque shots of Western landscapes, and Hawke, who has hit a career stride in recent years, wouldn’t know how to turn in a bad performance if he tried. But there’s not enough here to make this journey worth taking. There have been better stories of Billy the Kid, and there are likely better ones to come.

Bahrain advance into round two