Bahrain advance into round two | THE DAILY TRIBUNE | KINGDOM OF BAHRAIN 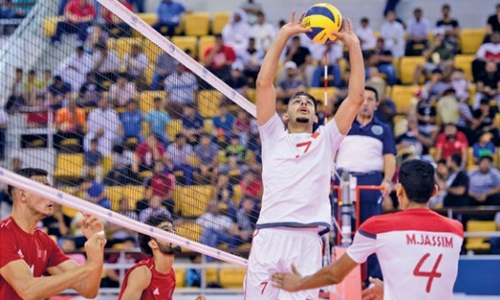 Bahrain advance into round two

Bahrain continued their inspired play and barged into the second round of the FIVB Volleyball Men’s U21 World Championship 2019 yesterday night at Shaikh Isa Sports City in Riffa. The hosts enjoyed a heart-stopping 3-2 (25-14, 23- 25, 25-21, 22-25, 15-12) win over a spirited Morocco for their second triumph in as many games in Pool A. The result made history for the Bahrainis as they advanced past the preliminary stage for the first time in this Federation Internationale de Volleyball (FIVB) competition.

Meanwhile, bouncing back from losses in their first games were Cuba and the Czech Republic. Cuba overcame fellow-South Americans Argentina in a tightly contested five-setter, while the Czech Republic beat Tunisia. They both kept their hopes alive for a berth in round two. Despite their losses yesterday, Argentina and Iran are also still with a chance to march through. Tournament action continues today with the final day of the first round. Matches begin from 11.30am and continue until the night. All are welcome to attend.

Entrance is free of charge. In Bahrain’s win over Morocco, the two teams split the first two sets but the home side did well to respond in set three. Morocco halted their momentum in the fourth, however, and in a see-saw fifth, Bahrain were able to overcome a three-point deficit and secure the win in the end. Hasan Mohamed top scored for Bahrain with 23 points, while skipper Mahmood Abdulhusain added 15. Abdulhusain said after the win: “We feel a little tired now, we have been working very hard, but we are happy because we achieved our goal of qualifying for the next round.

“We made some mistakes because we were a little nervous. But in the fifth set, we concentrated on our weaknesses and our mistakes, and that really helped us win.” Bahrain head coach Yousuf Khalifa added: “This is a big achievement for Bahrain. We are really happy. Morocco have a good team, and we can say that this five set match we enjoyed very much.” In Russia’s hugely exciting match with Iran in Pool C, the victors fought back valiantly after twice going down a set.

“It’s a game; when you lose the first or second set, it is nothing; it is normal,” said Russia team captain Konstantin Abaev. “I think Iran are one of the three or four strongest teams in the tournament and I think we will see them again in the semi-final or final. I hope we will play well enough to reach these stages. It will be really good for us and I hope we play better and better.” On securing a berth in round two, Abaev added: “Yes, we are going to the next round but still we must play every match and do everything for the win and to get better.” The Iranians must now defeat the Czech Republic today to secure their place in the next stage.

The Czech bounced back from a loss on opening night in a 3-0 (25-21, 25-21, 25-21) sweep of Tunisia in the other Pool C encounter yesterday. Their triumph set up their do-or-die clash with their Iranian counterparts. Marek Sotola had 12 points to pace the Czech side, while Yassine Abdelhedi led Tunisia with 10. “It looks like an easy match but the truth is different,” said Czech Republic team captain Ondrej Piskacek. “Tunisia played very well on service, especially on float service, so we had problems receiving.

“I also think we started a little bit nervous, but in the end of the sets we played with good defence and blocking. I think that was the key in winning the match.” For Korea, they enjoyed a straightforward 3-0 (25-22, 25- 18, 25-21) win over Egypt and have assured they advance from Pool B. They face Argentina today in their final game of this phase. Cuba still have an outside chance but must win against Egypt and hope Korea beat Argentina. Korea captain Donghyeok Im had 19 points to pace the winners. Donghyeok later commented: “This is just the first stage of the competition.

We are happy now and quite satisfied to win, but we still have a lot of matches to play. We will go one step at a time and we can show more of our abilities.” In Pool D, Brazil cruised past Canada 3-0 (25-15, 25-19, 25-13), led by the 14 points of Victor Aleksander Almeida Cardoso. Brazil captain Rhendrick Resley Rosa commented: “We came to play this match in a very decisive manner. We came in for the kill. We didn’t really start in the best situations but towards the third set, we had it all figured out and we played a lot better.”