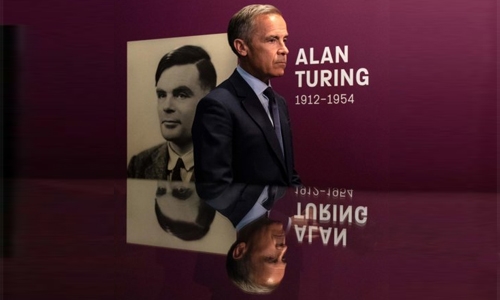 World War II code-breaker Alan Turing has been chosen to feature on Britain’s new £50 note, the Bank of England announced, decades after his tragic death following a conviction for homosexuality. Turing played a pivotal role in the development of early computers, but his career was cut short by his conviction in 1952 for gross indecency with a 19-year-old man. He did not go to prison but was chemically castrated and died of cyanide poisoning in an apparent suicide in 1954, aged 41.

“Alan Turing was an outstanding mathematician whose work has had an enormous impact on how we live today,” Bank of England governor Mark Carney said as he unveiled the note worth £50 ($63, 56 euros). “As the father of computer science and artificial intelligence, as well as war hero, Alan Turing’s contributions were far ranging and path breaking,” he said at the Science and Industry Museum in Manchester, northwest England.

“Turing is a giant on whose shoulders so many now stand.” Turing received a posthumous pardon from Queen Elizabeth II in 2013. The note, which is due to enter circulation by the end of 2021, shows a photo of Turing taken in 1951. The Oscar-winning 2014 film “The Imitation Game” starring Benedict Cumberbatch brought belated acclaim for Turing’s key wartime role when he helped crack German military communication codes, handing the allies a huge trove of intelligence.

The new £20 note, due to enter circulation next year, will feature artist J. M. W. Turner on its back. The new polymer £5 and £10 notes already in circulation show wartime leader Winston Churchill and author Jane Austen respectively