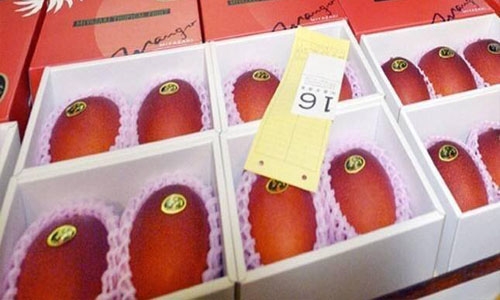 A couple in Jabalpur in Madhya Pradesh has had to beef up security around their orchard in order to protect some of the most expensive mangoes in the world.

According to a Times of India report, three guards and nine dogs have been deployed to protect the precious fruit called Miyazaki mango, otherwise known as Taiyo no Tamago or egg of the sun.

Rani and Sankalp Parihar started out with two mango saplings that were gifted to them by a fellow train passenger years ago. At the time, they had no idea that the saplings would produce such a rare and costly fruit.

The couple now have 150 such trees in their orchard, although only four are currently bearing fruit.

Speaking to local media, the duo said a spate of thefts last year compelled them to take the extra security measure this year. Locals who got wind of the coveted and expensive mangoes in their neighbourhood had broken in and stolen some of the fruits back then.

The couple have been receiving offers to buy the fruit of their latest harvest — but are unwilling to sell them for now. "A buyer was ready to pay Rs 21,000 for a piece," said Rani. "We have decided to use them to grow more fruit instead."