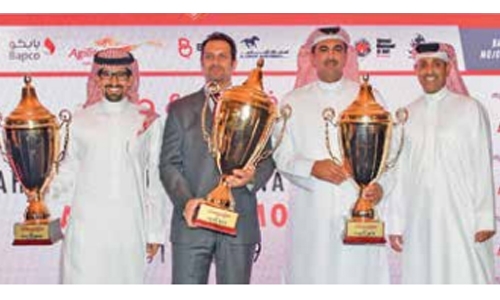 Bahrain International Circuit (BIC) hosted its Endof-Season Awards Night over the weekend and honoured the newly crowned champions of the 2018/2019 national racing season. Among the awardees were the winners in the BIC 2,000cc Challenge, the Bahrain Karting Sprint Championship (BKSC) and the Bahrain Karting Endurance Championship (BKEC). BIC Chief Executive Shaikh Salman bin Isa Al Khalifa was on hand to preset the various trophies.

The top three also had separate trophies presented to them for ending the season first through third in the championship’s Pro class; while Himmo, Salerno and Martyna Al Qassab were honoured for being the best three in the Novice category. Shaikh Salman bin Isa bin Ebrahim had a pair of additional awards. During the season, he posted the 2,000cc Challenge’s Fastest Lap and also clinched the Most Pole Positions. Meanwhile, in the BKSC, Shaikh Salman awarded the winners in the two categories that make up the championship, namely the Bahrain Rotax Mojo Max Challenge (BRMMC) and the Bahrain Sprint Sodi World Series (BSSWS).

In the BRMMC, Luca Kane Houghton was presented with the champion’s trophy in the Micro class, where he won ahead of runner-up Gracie Rose Grantham and third-placer Louis Elnabulsi. Santhosh Kumar was presented the winner’s trophy in the Mini category ahead of Matteo Quintarelli and Jacob Topp. Fahad Alkhaled was victorious in the Junior class where Fahad Almuqla came second and Omar Aldereyaan was third. Mohammed Mattar was the champion in the BRMMC’s Max category after a tough battle with Raed Raffii and Hussain Hasan. Essa Aldossary claimed the title in the Max Masters class, while Fred Clark was second and Osama Azoouka third.

Amongst the teams’ championships, Absolute Racing took three out of five titles, winning in the Micro, Mini and Max categories. Dojomoto Racing triumphed in the Juniors class and ED Racing Team in the Max Masters. Along with their individual championships, the BRMMC’s winners also won entries to compete in prestigious karting events in Europe in the coming months. Houghton, Kumar, Alkhaled and Raffii all won seats in the Rotax Max Challenge International Trophy, set to take place August 20 to 29 in Le Mans, France.

Mattar, on the other hand, earned a berth in the Rotax Max Challenge Grand Finals, scheduled for October 19 to 26 in Sarno, Italy. In the BSSWS, Shaikh Salman presented Ali Baslar the trophy for being the season’s champion. Abdulla Buhinid finished in second place while Rashid Almuammari came third. Finally, Shaikh Salman hooured winners in the BKEC and handed over their trophies. Racing Bahrain were the overall champions.

Human spirit climbs to another level in ‘Free Solo’