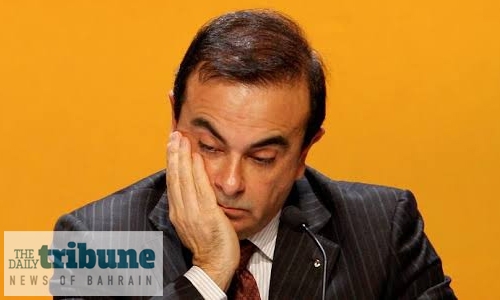 Japan yesterday said it would tighten immigration measures after former Nissan boss Carlos Ghosn fled the country while on bail, its first official response to an astonishing escape that has transformed the executive into an international fugitive. Authorities have remained quiet after Ghosn revealed on Tuesday that he had fled to his childhood home of Lebanon to escape a “rigged” justice system in Japan.

All government offices and most businesses in Japan have been shut for the new year holidays. The former Nissan Motor and Renault chairman was arrested in Tokyo in November 2018 and faced multiple charges of financial wrongdoing, which he denies. Justice Minister Masako Mori said Ghosn’s “apparently illegal” departure was very regrettable and added there was no record of him leaving the country.

She promised a thorough investigation and said authorities had issued an international notice for his arrest. “I have instructed the Immigration Services Agency to coordinate with related agencies to further tighten departure procedures,” she said, adding that Ghosn’s skipping bail was not justified, and that the court had revoked his bail.

Separately, prosecutors issued a statement defending Japan’s justice system, saying his departure ignored the legal system and amounted to a crime. It remains unclear what Japan might do to bring him back.

It has extradition treaties only with the United States and South Korea, meaning it might be difficult to return Ghosn from Lebanon. Mori was due to brief reporters in Tokyo on Monday morning.

Lebanon this week said it had received an Interpo larrest warrant for Ghosn. It has said he entered the country legally. A senior Lebanese security official said it was not yet clear whether Ghosn would be summoned for questioning over the warrant, but added that Lebanon does not extradite its citizens.

The Wall Street Journal has reported that Ghosn slipped out of Japan aboard a private jet hidden in a large black case typically used to carry audio gear. He was accompanied by a pair of men with names matching those of American security contractors, the newspaper said, citing people familiar with an investigation into the escape.

There was no X-ray conducted of the large case, which was loaded onto the private jet that was believed to have carried Ghosn, Japanese broadcaster NHK reported. A Turkish private jet operator has said two of its planes were used illegally to carry Ghosn, with an employee falsifying the lease records to exclude the executive’s name.

According to the company, MNG Jet, he flew from Osaka, Japan, to Istanbul, where he changed planes and flew to Beirut. Turkey has detained seven people, including four pilots, as part of an investigation into his passage through Istanbul. Japanese prosecutors said the legal system guarantees all defendants a prompt, open and fair trial.

They added that Ghosn’s more than 100 days of detention were justified on the grounds that he “had an extensive domestic and overseas network and that he could deploy his considerable influence to conceal evidence.”