Bahrain unemployment rate down to 5.4% in 2022 | THE DAILY TRIBUNE | KINGDOM OF BAHRAIN 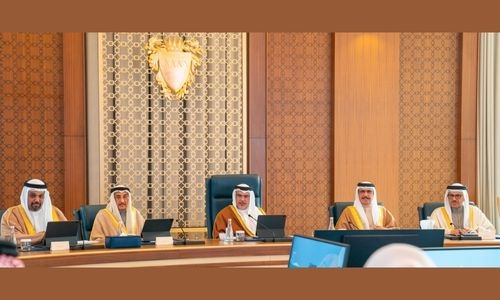 The Cabinet yesterday reviewed a memorandum submitted by the Minister of Labour, regarding the latest developments in employment and training for 2022 within the Economic Recovery Plan.

The Cabinet reviewed a memorandum of the Ministerial Committee for Social Services on the latest developments in the Health Insurance Scheme, “SEHATI”.

It also reviewed a memorandum submitted by the Minister of Cabinet Affairs, following up on the performance of government agencies across the “Sijilat”, “Tawasul”, and “Benayat” systems in 2022, which remain vital indicators of government service efficiency.

The memorandum demonstrated advanced performance levels in the “Tawasul” system, where 53 government agencies received more than 179,421 submissions, inquiries, and complaints, and of which 99.3% of cases have been addressed in the specified timeframe.

Regarding the “Benayat” system, 2,309 requests were received, and none of which exceeded the time limit specified in the service level agreement.

With regards to “Sijilat”, there were 169,528 requests received with an SLA compliance rate of 99%.

The Cabinet highlighted the importance of the discussions held between His Majesty King Hamad bin Isa Al Khalifa, and the UAE President His Highness Shaikh Mohamed bin Zayed Al Nahyan during His Majesty’s visit to the UAE.

On the occasion of International Day of Education, the Cabinet congratulated Bahrain’s educational professionals, highlighting their critical role in contributing to the country’s education sector, one of many sectors under the Kingdom’s comprehensive development, led by His Majesty the King.

‘World’s worst’ McDonald’s to shut down