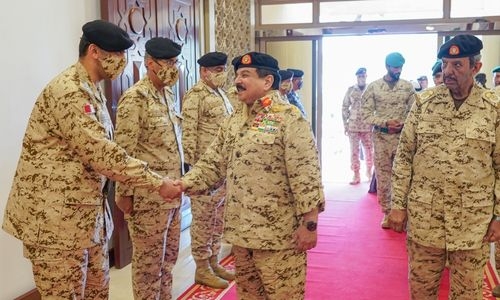 His Majesty King Hamad bin Isa Al Khalifa expressed his pride in Bahrain’s defence staff and their competence, and noted their constant keenness to carry the out patriotic tasks entrusted to them with courage and determination.

HM the King, the Supreme Commander of the Armed Forces, hailed the efforts exerted by the Bahrain Defence Force (BDF) with determination and sincerity to preserve Bahrain’s successful progress achieved through the unity and solidarity of Bahraini citizens and wished them further success.

This came as His Majesty visited the General Command of the BDF yesterday.

During the visit, HM the King was briefed on plans and programs for the development of various units and praised its steady progress in the fields of armament and training.

He lauded the good organisation of the graduation ceremony held under HM’s patronage of the 15th batch of officer candidates “Al Qadisiyah” at Isa Royal Military College.

HM the King wished the graduates success in their patriotic duties alongside the valiant officers.

The Supreme Commander of the Armed Forces praised the programs and specialised courses of the BDF in all fields and military sciences at the hands of the best qualified trainers and through the latest advanced methods.

He also hailed exchanging experiences and expertise and enhancing competencies through joint military exercises regularly conducted with other countries.