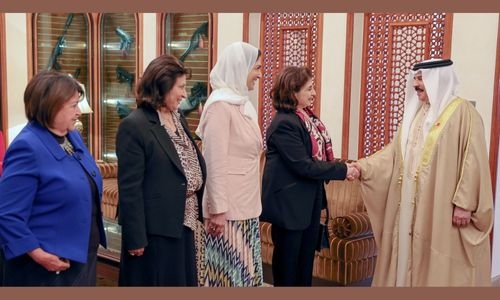 His Majesty King Hamad bin Isa Al Khalifa has commended Bahraini women for contributing significantly to the Kingdom’s development process, and playing a noble role in taking care of their families.

HM the King expressed pride in the numerous achievements of Bahraini women, citing their contributions to the kingdom’s comprehensive development and decision-making processes, and their success in reaching the highest positions locally, regionally and globally.

His Majesty was speaking as he received at Al Safriya Palace yesterday a delegation from the UN Women and members of the international jury of the “Princess Sabeeka bint Ibrahim Al Khalifa Global Award for Women’s Empowerment”, led by UN Under-Secretary-General and UN Women Executive Director, Sima Sami Bahous.

The delegation is visiting the Kingdom to announce the winners of the second edition of the Princess Sabeeka bint Ibrahim Al Khalifa Global Award for Women’s Empowerment during the ceremony which will be held tomorrow under the patronage of Her Royal Highness Princess Sabeeka bint Ibrahim Al Khalifa, Wife of HM the King and SCW President, on the sidelines of the kingdom’s celebrations of the Bahraini Women’s Day 2022.

HM the King commended the efforts of the international jury’s president and members, praising the pioneering role of the Supreme Council for Women, led by HRH Princess Sabeeka, to enhance the status of Bahraini women and consolidate their effective role at the international level.

HM the King lauded the benevolent goals of the Award, aiming to highlight the importance of women’s contributions to development efforts and social stability in all countries.