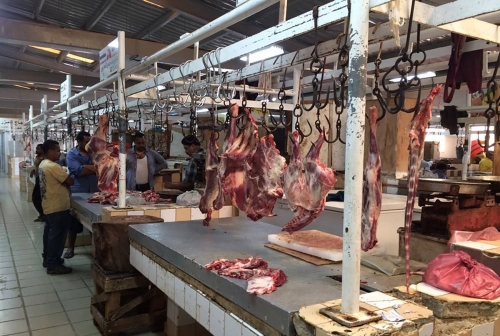 These men are already tackling multiple crises in their daily lives. On top of that is the predicament of working without air conditioning amid the intense summer heat, complains meat sellers at the Manama Central Market.

“Those AC units stopped working days ago,” said traders pointing fingers at the silent boxes sitting high on the walls. “The worst part, however, is that the heat is now hurting our businesses too as customers are finding it too hot and are walking away soon after arriving,” sellers there said as they struggled to wipe away the sweat dribbling down their faces under the unusually high temperatures inside the market.

“Customers are moving out quickly, without making purchases, opting for other nearby places where they could stay cool,” traders said without masking their disappointment.

“This is giving us a real nightmare,” they said, adding if this continues, it could potentially lead to a huge disaster in our sales. “The meat we sell needs a moderate temperature to keep it suitable for consumption and preserve it from spoilage and rotting.

“If this continues, we will have to take huge losses,” the traders said, calling on authorities to act quickly to solve the issue. Speaking to The Daily Tribune, a mutton merchant, who doesn’t want to be identified, said municipality officials have always been unsympathetic to the sufferings.

We are in the peak of summer and how could these officials refrain from giving a directive to repair this defunct air-conditioning system?” 3 toilets for 500! He said there are only three toilet facilities for over 500 workers at the meat market.

“Most of us rush to the toilet facilities at the nearby mosque to attend to nature’s call. But they are only open during prayer times.” The mutton merchant said a group of workers earlier raised this issue before the authorities when they inspected the market. “However, no steps were taken in this regard. We are requesting the authorities to provide ten more facilities.”