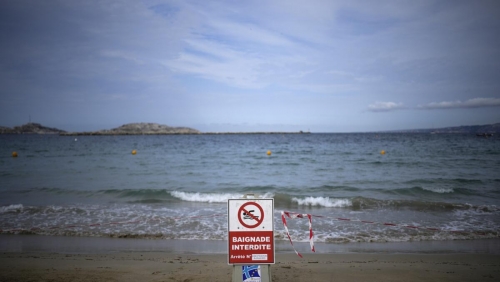 Violent thunderstorms and hurricane-force winds left at least eight dead on in France and Italy, uprooting trees in Tuscany and on the French island of Corsica and ripping away brick shards from St. Mark's famed bell tower in Venice. Over 100 boats in the Mediterranean Sea called for emergency help, authorities said.

The storm produced gusts of more than 220 kph in some areas, the national weather agency Meteo France said. About 45,000 households were without power on Corsica, where six people were killed. Dozens of people were injured and 12 were hospitalised in Corsica, one in critical condition, authorities said.

The Italian regions of Tuscany and Veneto both declared a state of emergency, as the violent storms in the north contrasted with temperatures up to 43 degrees Celsius (109 degrees Fahrenheit) in southern Italy.

Storms in recent days have slammed Western European countries after a summer of extreme weather, while neighbors in central and eastern Europe are still suffering exceptional heat waves and drought.

Two people were killed in separate incidents in Tuscany when trees were ripped up by storms Thursday, one near the city of Lucca and another near Carrara. Another four people were injured by falling trees at a campground near Carrara.

Rescue crews found the bodies of a 62-year-old fisherman and an unidentified kayaker off Corsica's west and east coasts, according to the French maritime authority for the Mediterranean. It said both died as a result of the sudden storm and that more than 100 grounded, wrecked or stranded ships in the area have called for emergency help. A sixth victim was reported late Thursday.

In Venice, high winds detached pieces of brick from St. Mark’s bell tower, which stands in front of the famed cathedral. Tourists were evacuated from the structure, which was cordoned off. The storm upended chairs and tables in St. Mark’s Square and elsewhere, and swept away beach chairs on the nearby Lido.

Winds rose suddenly and were calmed within five minutes, said Carlo Alberto Tesserin, the caretaker of the Basilica and bell tower. "These were not usual winds for us,'' Tesserin told The Associated Press.

In northern Italy, an overnight storm forced the closures of a train line southeast of Genoa after high winds carried beach structures onto the tracks, damaging the electrical circuitry.

The storm struck during Italy’s busiest beach vacation week. The mayor of Sestri Levanti, Valentina Ghio, warned that whirlwinds were possible and appealed to visitors to stay away from beaches until the severe weather had passed.

Hail the size of walnuts pummeled Italy's Liguria region with enough force to break the windows of homes and damage orchards and gardens.

While northern Italy has suffered its worst drought in decades this year, heavy rains in recent days that brought scattered hailstorms, whirlwinds and flooding have damaged or destroyed entire crops of fruits and vegetables along with vineyards and olive orchards, according to the Italian agricultural lobby Coldiretti.

Thunderstorms on Wednesday flooded Paris subway stations and the Old Port of Marseille, and winds over 100 kph were recorded at the top of the Eiffel Tower during a flash flood Tuesday.

The fierce rains come amid a summer of of drought, heat waves and forest fires across Europe that scientists link to human-caused climate change.

Yet to the east, on Hungary’s Southern Great Plain, shepherd Sandor Kalman can only dream of rainfall. He grazes sheep on lands desiccated by intense heat and low rainfall. As he walks on his pastures, the grass —- splotched by broad patches of dry dust and sand — crunches beneath his boots.

“In this heat wave, this clay soil actually burns the sheep’s feet, it’s so hot,” he said, adding that his herding dogs also find it difficult to walk on the parched earth. “I’m 57 years old, but I’ve never seen a drought this big.”

Hungarian meteorological data this year shows the most severe lack of rainfall since 1901.

Water levels of the Danube River, one of Europe’s largest waterways, have dropped by five feet (1.5 meters) in three weeks near Budapest, leading the regional water company to warn that the supply of drinking water could be threatened.