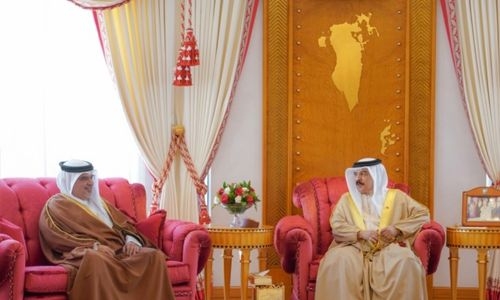 HM the King reviewed several local issues and topics, particularly regarding the landmark achievements attained by the kingdom, as a result of the ongoing comprehensive development process Bahrain is witnessing at all levels to better serve the nation and the citizens.

HM King Hamad expressed thanks and appreciation to HRH the Crown Prince and Prime Minister for the tremendous efforts HRH is exerting to improve the work of public institutions and government departments, contributing effectively to optimising national gains

HM the King also commended the fruitful efforts made by the relevant ministries and institutions, as well the Jaffari Endowments Council and those in charge of ma’atams (community centres), to ensure the success of this year’s Ashura Commemoration, stressing that the success reflects the robust social fabric, and the prevailing cohesion and cordiality among all Bahrainis, who have also been known for their respect for pluralism, which has been a source of strength for the kingdom throughout its long history.

HM King Hamad lauded the landmark youth and sports achievements attained by Bahraini athletes over the past period, citing their outstanding success at the West Asian Table Tennis Championship, hosted by Jordan, and the fifth Islamic Solidarity Games, held in Konya, Türkiye.

HM the King asserted that the victories reflect Bahrainis’ dedication, distinction and keenness to honour their nation and consolidate its leadership.