We have many goals to achieve in Montalcino endurance championship: HH Shaikh Nasser | THE DAILY TRIBUNE | KINGDOM OF BAHRAIN 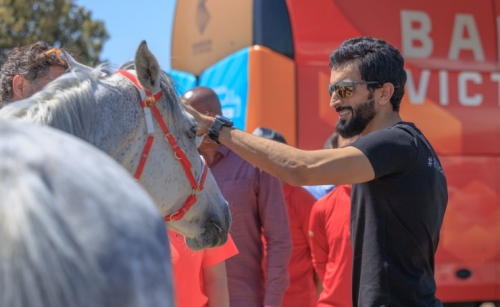 Under the captaincy of Representative of His Majesty the King for Humanitarian Work and Youth Affairs, Royal Endurance Team Captain, His Highness Shaikh Nasser bin Hamad Al Khalifa, the Royal Endurance Team will participate today (May 21) in Montalcino international endurance championship in which jockeys from the Royal Team and European countries will take part.

His Highness explained that the royal team is proceeding according to the vision that was set and its goal is to continue confirming the team's position in the European arena. He indicated that the Montalcino international championship will help prepare the Royal Team for the next world championship. He added that the aim is to attain many goals and achievements and further promote Bahrain endurance sport in various participations. He pointed out the accomplishments brought about by Bahrain endurance sport over the past period, stressing keenness on building on them by making more achievements.

HH Shaikh Nasser bin Hamad Al Khalifa followed on the veterinary examination for the championship, in the presence of Deputy Chairman of the Supreme Council for Environment, Deputy Chairman of the High Authority of the Rashid Equestrian and Horse Racing Club, member of the Supreme Council for Youth and Sport, HH Shaikh Faisal bin Rashid Al Khalifa. He also attended the weighing process of the jockeys and met with the horse riders after the veterinary examination.

The Italian endurance village of Montalcino championship saw the presence of Bahrain Victorious bus within the framework of media and tourism promotion for the Kingdom of Bahrain. The bus decorated with the name of the Kingdom of Bahrain and the Victorious Team will certainly attract the attention of the media in the village after the great success it enjoyed during its presence in several previous tournaments.

What is monkeypox and where is it spreading?