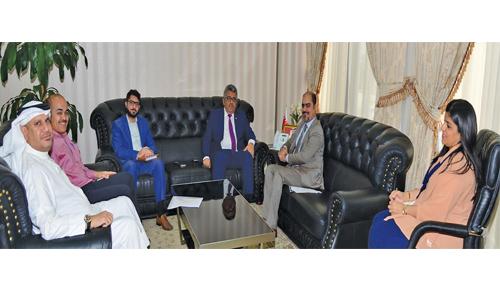 Sacked Alba trainees to be reinstated on Sunday

The recently-sacked Bahraini trainees of Aluminium Bahrain (Alba) will be reinstated on Sunday, it has been officially confirmed.

This was announced following a meeting held on Thursday between Labour and Social Development Ministry officials and representatives of Alba.

In a statement that followed the meeting, Dr. Al Ansari confirmed that the employees would be reinstated as pledged by Alba.

“The ministry requested Alba to cease the termination procedures of the Bahraini vocational trainees and to embrace them within the establishment,” said Dr. Al Ansari.

He also revealed the ministry demanded Alba to grant the trainees opportunities to prove their abilities.

According to Dr. Al Ansari, the ministry received a letter from Alba, stating, “Alba is keen on attracting national competencies and in this context it will urgently reassess the vocational trainees on Sunday, considering the training period they’ve spent in Alba.”

He said that the details of the vocational training contracts and the legal aspects of the recent termination procedures were also discussed in the meeting.

“Alba representatives informed that the ministry’s recommendations would be looked into and referred to the establishment’s administration to take the appropriate procedures. The ministry is looking forward to see the results of the vocational trainees’ reassessment,” Dr. Al Ansari added.

DT News earlier reported, over 50 Alba trainees marched almost 10 kilometres from Alba in Askar to Labour and Social Development Ministry in Zayed Town to protest against the company’s decision to “arbitrarily” terminate them.

The trainees also protested the next day in Askar, in coordination with Alba Labour Union. The company clarified that the trainees’ 24-month contracts end next week and the decision followed a mandatory assessment of their performance.