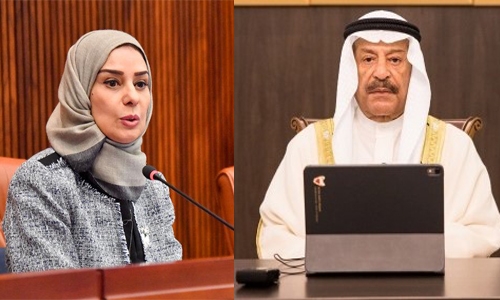 The Bahrain-Saudi relations are a distinguished role model for strong cohesion and shared destiny. This was emphasised by Council of Representatives Speaker Fawzia bint Abdulla Zainal as she praised the steady growth of solid fraternal relations between the two peoples, under the leadership of His Majesty King Hamad bin Isa Al Khalifa and the Custodian of the Two Holy Mosques King Salman bin Abdulaziz Al Saud.

The Speaker lauded the major role played by Saudi Arabia in safeguarding regional security and stability, as well as its international humanitarian initiatives and continuous development achievements, under the leadership of King Salman. She expressed pride in the pivotal role played by Saudi Arabia in preserving Arab and Islamic rights and freedoms, respecting international conventions and serving the issues of the Arab and Islamic nations, in line with its principles emanating from the Islamic religion.

Zainal extended deepest congratulations to the Saudi King, government and people on Saudi Arabia’s 91st National Day, wishing the brotherly Saudi people further progress and prosperity, under the leadership of the Custodian of the Two Holy Mosques.

She indicated that Saudi Arabia is the guarantor of the stability of the Arab and Gulf Cooperation Council regions, highlighting its tireless efforts to achieve stability and balance in the region since its establishment.

She affirmed the depth of the strategic deep-rooted brotherly relations between Bahrain and Saudi Arabia, stressing Saudi Arabia’s pioneering humanitarian, political and economic role at the regional and global levels, as well as its constant keenness to champion the just causes and consolidate Arab and Islamic unity.

Shura Council Chairman Ali bin Saleh Al Saleh expressed pride and appreciation for Saudi Arabia’s great role under the leadership of the Custodian of the Two Holy Mosques, in spreading peace, justice and equality, and ensuring security and stability in the region.

Al Saleh praised the support and consolidation of Arab solidarity by Saudi Arabia, preserving legitimate Arab rights and serving the causes of the Arab and Islamic nations, and wished Saudi Arabia further progress and prosperity.

He confirmed the great parliamentary cooperation and stressed the council’s keenness to support and strengthen ties for the interests of the two countries and peoples. The Shura leader sent a cable of congratulations to Saudi Arabia’s Shura Council Speaker Shaikh Dr Abdullah bin Mohammed bin Ibrahim Al Al Shaikh on his country’s National Day