Use social media to boost the progress of the Kingdom, says HH Shaikh Khalid | THE DAILY TRIBUNE | KINGDOM OF BAHRAIN 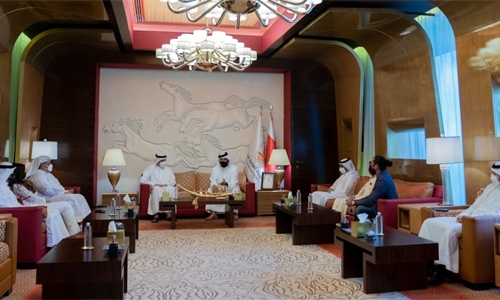 The First Deputy Chairman of the Supreme Council for Youth and Sports (SCYS) and the Chairman of the General Sports Authority and the President of the Bahrain Olympic Committee also called the media an essential partner in Bahrain’s youth development drive.

Media support for youth development initiatives, HH Shaikh Khalid said, is boosting the reputation of Bahrain at the regional and international levels.

HH Shaikh Khalid said this while meeting Ali bin Mohammed Al-Rumaihi, the Information Minister, and the jury of the “Your Talent at Home” competition.

The support provided by the Information ministry for youth movement initiatives, Shaikh Khalid highlighted, has contributed to a great extent in highlighting the truthful image of Bahrain.

Information Minister Al Rumaihi said the initiatives of Shaikh Khalid is creating opportunities for Bahraini youth to thrive and grow their creativity in various fields.

The minister also reaffirmed interest in promoting events and competitions enriching the youth movement and expressed pride in the potentials of the “Your Talent at Home” competition.

The programme in two categories, for above 16 and below 15, has competition covering acting, singing, shows, magic, strumming, painting and acrobatics. HH Shaikh Khalid had ordered to allocate prizes worth more than $60,000 for the winners.