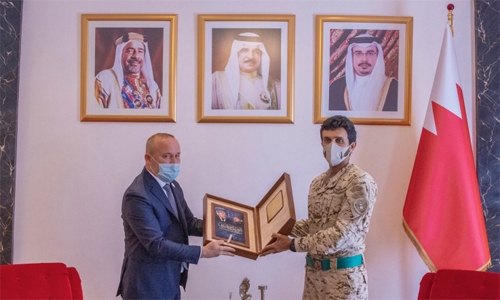 This came as HH Shaikh Nasser received yesterday the Advisor to the Chechen President and his Special Envoy to Arab Countries, Turko Daudov, who is currently on a visit to the kingdom.

HH Shaikh Nasser received a gift presented to HM the King by the President of Chechnya. HH Shaikh Nasser affirmed Bahrain’s keenness to bolster cooperation with Chechnya to serve the interests of the two countries and their friendly peoples, expressing hope that exchanged visits between the two countries will contribute to building bridges of communication between them, and opening up new horizons of joint cooperation across various fields.

Daudov expressed his country’s keenness to enhance cooperation with Bahrain, lauding the Kingdom’s achievements in various fields. The two sides reviewed cooperation relations between the two friendly countries, as well as the mechanisms to develop them. They also discussed issues of mutual concern.