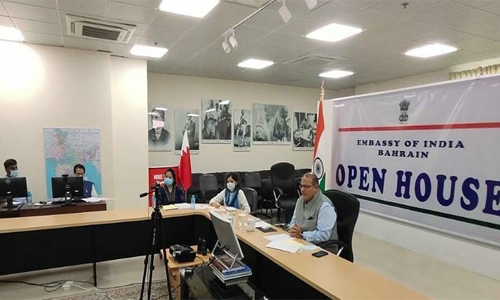 The Indian Embassy in Bahrain organised their monthly Open House virtually during which Ambassador Piyush Srivastava directly interacted with the Indian community for redressal of their urgent/non-routine consular and labour issues.

Ambassador commended the Government of Bahrain for achieving the milestone of one million of fully vaccinated population, as well as Manama being declared ‘Health City 2021’ by WHO; the first capital city in the Middle East region to have received this honour. He has also thanked the Government of Bahrain, for its vaccination campaign, particularly their support to our special vaccination drive of Indian community members, who were unable to get vaccines due to some reasons.

His Excellency encouraged the community members to follow Bahrain’s Covid advisory and protocols, as well as to get vaccinated to support Kingdom’s efforts in fighting pandemic as well as for their own safety. He also called upon the community members, who are facing any kind of problems in registering for vaccination, to register with the Embassy at the following link: https://forms.gle/pMT3v1g3o4yVgnES8

The link is also available at Embassy’s website and social media handles. 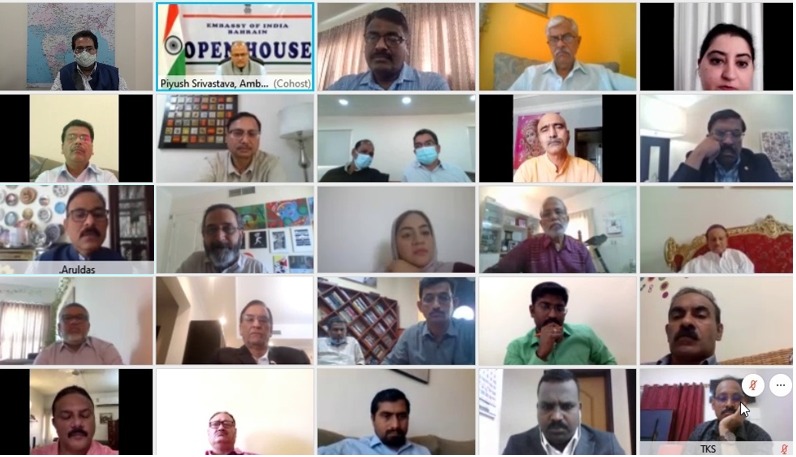 His excellency briefed the community about the significantly improved COVID situation in India (daily infection coming down drastically to around 40,000; recovery rate touching 97%, and vaccination coverage crossing 450 million).

Mr Srivastava informed the community that the Government of India is issuing vaccination certificates containing QR code along with passport number as well as an indication of both doses of vaccines which would be helpful in hassle-free travel for vaccinated Indian citizens, particularly with Covishield/AstraZeneca vaccine, to Bahrain as and when travel restriction eases.

He also thanked Indian Associations particularly the Indian Community Relief Fund (ICRF), World NRI Council and ATM for successfully resolving the cases of Mr Madhu, Mr Mohammed Khalid and the rescue of 4 housemaids and their safe repatriation to India.

It was a productive interactive session. The grievances/issues of the Indian community were successfully addressed; some resolved at the open house, while others will be taken up at the earliest possible. Ambassador thanked all the Indian associations and community members for their active participation in the open house.