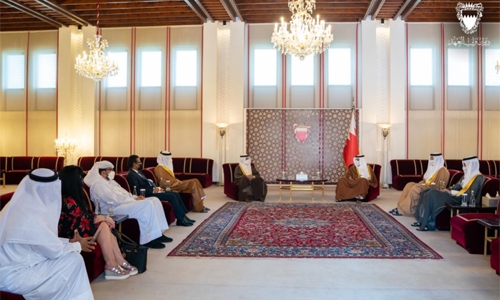 The will to achieve in the face of challenges and changes always act as the springboard for Bahrain’s excellence and builds on what has been achieved by the Kingdom, said His Royal Highness Prince Salman bin Hamad Al Khalifa, Crown Prince and Prime Minister.

Speaking to the recipients of the fifth edition of the Prime Minister’s journalism award at Riffa Palace, HRH CP and PM recalled the interest of HRH Prince Khalifa bin Salman Al Khalifa in fostering the press and journalists. “This was also the basis for the launch of the Prime Minister’s Award for Journalism,” said Prince Salman, adding that the award appreciates the role of the press in supporting national achievements.

HRH Prince Salman said that it is an honour to celebrate the outstanding achievements of the writers and media professionals armed against the challenges of Bahrain as a team. Bahrain, HRH Prince Salman said, seeks this impartial responsibility and objectivity of the journos to continue with determination, Bahrain’s march towards a more beautiful future, and brighten up its present.

HH Shaikh Ali bin Khalifa Al Khalifa, the Deputy Prime Minister, thanked HRH Prince Salman for his constant support to the national press and journalists. The awardees expressed their appreciation to His Royal Highness for promoting a diverse and vibrant media environment. The Minister of Information Affairs, Ali bin Mohammed Al Rumaihi, was also in attendance at the meeting.