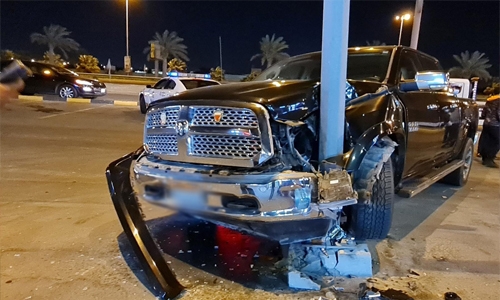 The man driving this vehicle should consider himself extremely lucky.

For, anyone who takes even a glance at his mangled car would find it hard to believe that he managed to escape unscathed.

The person -a Bahraini national- was driving through the Gulf of Bahrain Road near the Bahrain International Circuit in Zallaq when the accident occurred.

Police said the car involved in the accident came from the Manama side.

The man blamed the accident on a sudden turn made by a vehicle from its lane ahead of him.

He said, “I lost control of the vehicle, and in panic, rammed into the lamp post.”

Such was the impact that the lamppost, pierced through the left corner of the car, ended up jutting out of the engine bay.

Police said they took necessary measures and had opened an investigation into the circumstances leading to the accident.

No other vehicles were involved in the accident.