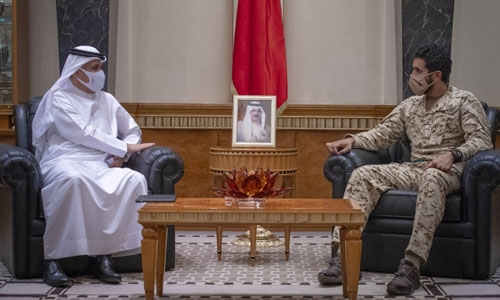 HH Shaikh Nasser commended NSSA for preparing research and studies and capacity building of Bahrainis to serve Bahrain’s orientations and enhance its position in space science.

He stressed the importance of continuing serious work to boost Bahrain’s capabilities in all areas, including the space sector and research development.

HH Shaikh Nasser was briefed on the major achievements accomplished by the NSSA and on the steps it has taken to enhance its performances.

The minister commended HH Shaikh Nasser’s interest in promoting the NSSA and stressed that Bahrain has now acquired distinguished experiences and gained aptitudes in space sciences.

Al Aseeri said HH Shaikh Nasser’s support was a great motivation for its members to advance space science as a major priority for Bahrain and stressed that the NSSA has laid out a strategy to boost its performance, enhance the skills of its personnel and deepen cooperation with other countries.