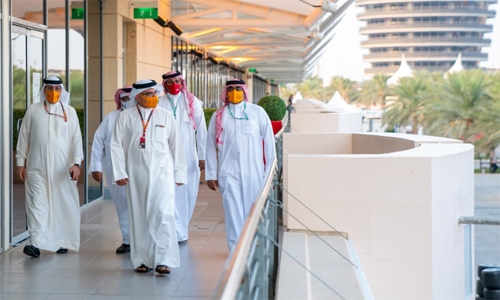 HRH the Crown Prince and Prime Minister paid tribute to the  skill and effort of the organisers in putting precautionary measures in place and making this year’s event a success, despite the exceptional challenges presented by the coronavirus (COVID-19).

HRH Prince Salman highlighted that this year’s Grand Prix was made particularly special by the attendance of frontline health workers, first responders and their families, as a sincere gesture of appreciation for their tireless COVID-19 efforts.

Following the conclusion of the Formula 1 Gulf Air Bahrain Grand Prix 2020, BIC Chairman Arif Rahimi commented: “We offer our very best wishes to Romain Grosjean as he undergoes further evaluation at BDF Hospital, following his accident at the start of the race. Incidents of this nature are a reminder of the incredible work which the FIA has undertaken to improve safety in the sport. “I also thank the FIA medical team and our marshals for their incredibly swift and decisive action in responding to this incident.

“It was a great honour and privilege for us to host this evening for the Kingdom’s frontline health workers, first responders and their immediate family members, and we hope they enjoyed the race.”

“We extend our sincerest thanks to all those who have made the F1 Gulf Air Bahrain Grand Prix possible, particularly our partners at F1, the FIA, the Bahrain Motor Federation as well as our Team Bahrain colleagues across Government. It is the close coordination with all these partners, which has enabled us to put on a safe event, dedicated to our frontline heroes and first responders.

“I also thank the team here at BIC, as we prepare for next weekend’s unique second race. We look forward to welcoming everyone again in a few days.”