Crackdown on illegal vendors, construction in Bahrain | THE DAILY TRIBUNE | KINGDOM OF BAHRAIN 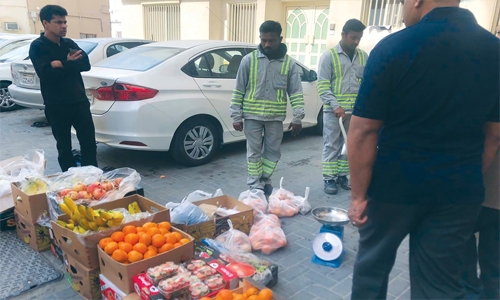 The Capital Municipality removed 1,924 violations related to street vendors in nine months, it was announced.

The municipality said it regularly organises campaigns to eliminate infringements of street vendors to enhance the aesthetic appearance and ensure the safety of the citizens. Municipal officials said they would continue to organise campaigns to remove structures that violate the Public Road Works Act. Terming the encroachments as “uncivilised”, the municipality said, “Such acts spread negativity in the local community and obstructs and confuses the pedestrians and drivers.”

Officials said they were organising daily and weekly campaigns to end the menace. “Last Friday, we removed 20 mattresses from the centre of Manama in Complex 304, which is a routine campaign carried out by inspection teams.”

Illegal street vendors thus removed reached 633 in the third quarter of 2020, bringing the number from January until September this year to 1,924, officials confirmed.

The Capital Municipality also appealed to citizens and residents not to to deal with such vendors or buy products from them.