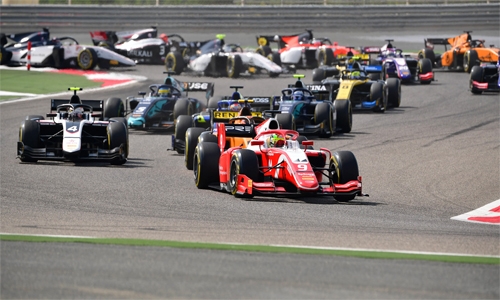 Bahrain International Circuit (BIC) will this weekend be the setting for the penultimate round of the 2020 FIA Formula 2 Championship, global motorsport’s most competitive single-make series, being held in support of the Formula 1 Gulf Air Bahrain Grand Prix.

Twenty-two of motor racing’s brightest young talents are set to line up on the grid at “The Home of Motorsport in the Middle East” as they continue their journey towards a potential F1 seat in the future. F2 is widely accepted to be the chief feeder championship to the top flight, with the likes of F1’s young stars having graduated from F2 in recent years, such as Charles Leclerc, Lando Norris, George Russell, Alexander Albon and Nicholas Latifi, to name just a few.

This year, spearheading the pack is Mick Schumacher, son of seven-time F1 World Champion Michael Schumacher, who is the current leader on the drivers’ championship standings.

Schumacher is no stranger to BIC, having raced here in the past in other junior formulae as well as in F2 last year. The German will be competing alongside teammate Robert Shwartzman for Prema Racing, who is the current frontrunners in the teams’ championship fight.

Several other top names are to battle it out along BIC’s 5.412-kilometre Grand Prix track this weekend, including Christian Lundgaard of ART Grand Prix and Guanyu Zhou of Uni-Virtuosi Racing, who both tested with Renault F1 team in Sakhir less than a month ago.

Others are Sean Gelael of Dams, Yuki Tsunoda of Carlin, Jack Aitken of Campos Racing, Louis Deletraz of Charouz Racing System, Artem Markelov of BWT HWA Racelab, Luca Ghiotto of Hitech Grand Prix, and Roy Nissany of Trident, all of whom have tested in an F1 car in the past, and many of whom have scheduled F1 drives in the coming weeks.

Completing the entry list are Callum Ilott for Uni-Virtuosi Racing, who is currently second in the drivers’ championship behind Schumacher and ahead of Tsunoda, Marcus Armstrong of ART Grand Prix, Daniel Ticktum of Dams, Jehan Daruvala of Carlin, Guilherme Samaia of Capos Racing, Pedro Piquet of Charouz Racing System, Theo Pourchaire of BWT HWA Racelab, Marino Sato of Trident, Nikita Mazepin of Hitech Grand Prix, and the MP Motorsport pair of Giuliano Alesi and Felipe Drugovich.

The weekend’s events in F2 feature a 45-minute Practice at 12.35pm and a half-hour Qualifying at 4.15pm on Friday. A Feature Race run over 32 laps will then take place at 12.10pm on Saturday, and then a 23-lap Sprint Race wraps up the F2 action at 1pm on Sunday.

The grid for the Sprint Race is to be determined by the finishing order of the first race, with the top eight positions reversed.

Just like F1, F2 is holding a double-header at BIC in 2020. Following this weekend’s meeting, the season’s final round will take place in support of the F1 Rolex Sakhir Grand Prix from December 4 to 6.

F2 is one of two series supporting the F1 Gulf Air Bahrain Grand Prix. The other is the Porsche Sprint Challenge Middle East, which will be holding the opening round of its 2020/2021 campaign.

F2 officials and team members have already begun arriving in the Kingdom and begun setting up at BIC along the Support Race Pits. For more information, visit bahraingp.com.