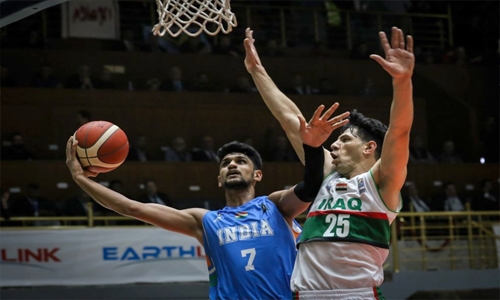 Hosts Bahrain will have a tough challenge when they take on Iraq and India later this week in their next two qualifying games for the 2021 FIBA Asia Cup.

The nationals will be playing on home soil, but will not have the benefit of local fan support, as no spectators will be permitted at the playing venue due to the ongoing health crisis.

The Iraqis arrived in the kingdom yesterday while the Indians are scheduled to reach the country today.

They are in Group D in this stage of qualifying along with Lebanon, who are also already in Bahrain for this week’s action. All fixtures will be played at the Khalifa Sports City Stadium in Isa Town, from Friday to Monday.

Iraq lost their first two qualifying games against Lebanon and India in February of this year, but is determined to bounce back when they face Bahrain on Friday at 7pm. It will be their first of two meetings against the nationals in this stage of the qualifiers.

Their line-up is rounded out by Jagdeep Singh, Sahaij Pratap Singh Sekhon, Prasanna Venkatesh, Anil Kumar Gowda, Seijin Mathew, Sahajkumar Patel, Sharad Dadich and Prashant Singh. Bahrain and India lock horns on Sunday at 7pm. The Bahrainis had beaten their Indian counterparts in their opening clash last February, also played at home, by a single point, and the visitors will now hope to avenge that defeat. The Indians had won their next game against the Iraqis.

Bahrain has been training behind closed doors the past few weeks under head coach and former NBA champion Sam Vincent.

Games in qualifying’s Group A are also set to be held in the Kingdom this week, featuring the Philippines, Indonesia and Thailand. Korea is also in the group but they have withdrawn from competing in Bahrain.

The visiting teams are scheduled to begin training today. The Bahrain Basketball Association has allocated Zain Basketball Arena in Um Al Hassam and the Manama Club basketball gym in Juffair as practice venues.