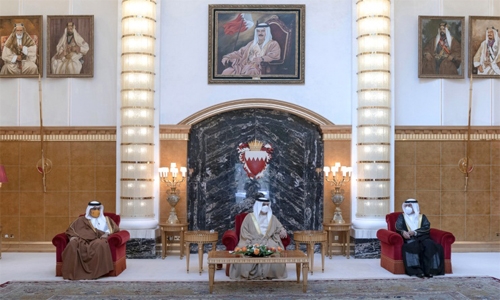 They extended deepest thanks and gratitude to HM King Hamad for offering condolences and sympathy over the passing of the late His Royal Highness Prince Khalifa bin Salman Al Khalifa.

HM the King lauded the late HRH Prince Khalifa’s virtues, pioneering efforts and numerous contributions to the Kingdom’s achievements in all fields, affirming that with his demise, Bahrain had lost one of its great leaders.

HM King Hamad affirmed that the deceased had devoted his life to enhancing the homeland’s progress and achieving the aspirations of its people, as well as to serving the Arab and Islamic nations.

HM the King said that the late HRH Prince Khalifa will always remain a national symbol in the national memory, praying to Allah the Almighty to grant the deceased mercy and forgiveness, rest his soul in eternal peace and bless everyone with patience and fortitude.

HM King Hamad expressed appreciation for and pride in the dedication of successive generations of Bahrainis in building the nation and enhancing its progress, lauding their effective contributions to nation-building and progress across various fields of national work.

HH Shaikh Ali bin Khalifa Al Khalifa and the grandsons of the late HRH Prince Khalifa bin Salman expressed profound thanks, appreciation and gratitude to HM the King for his good noble feelings.

They prayed to Allah the Almighty to protect HM King Hamad, bless him with abundant health, happiness and long life, and to guide him on the right path for the best interests of Bahrain and its people.

They also wished the kingdom further progress and prosperity, under HM the King’s wise leadership.