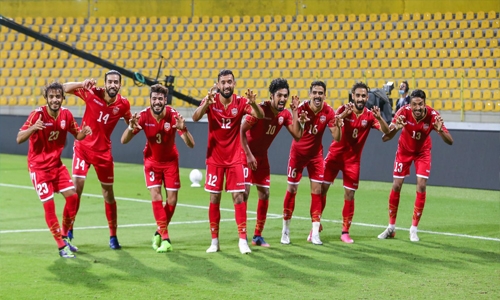 Bahrain scored a resounding 3-1 victory over the UAE last night in an international friendly match played in Dubai.

Mohammed Al Rumaihi had a brace while Mohammed Marhoon fired in from the penalty spot—all within a dominant 11-minute span near the final whistle—as the Bahrainis fought back from a one- goal deficit having conceded the game’s opener right after the half-hour mark in the first half.

The result gave the Bahrainis a clean sweep of their three tune-up fixtures in their overseas training camp in the Emirate. They had previously beaten Tajikistan 1-0 and then followed it up with a 3-1 triumph over Lebanon.

The camp is part of their preparations for their upcoming joint-qualifying matches for the 2022 FIFA World Cup and the 2023 AFC Asian Cup. They are scheduled to fly home today after being in Dubai since November 1. It was the senior men’s national team’s first major gathering since February of this year.

Jassim Al Shaikh should have given Bahrain a brilliant start to the contest but his curling shot from outside the box in the fourth minute bounced off the crossbar.

The Emiratis, whose line-up features a number of foreign-born players, then took the lead in the 33rd minute with a well-hit shot into the top-right corner from naturalised Brazilian Caio Canedo Correa, which flew far from the reach of Bahrain goalkeeper Sayed Mohammed Jaffar. That was enough to give the hosts the lead heading into the break.

In the second half, the Bahrainis fought back hard and in the 73rd minute were awarded a penalty after the UAE’s ex-Argentinian Sebastian Tagliabue brought down Ali Madan in the area. Marhoon stepped up to take the spot kick and he sent the ball home two minutes later.

The Emiratis had a golden opportunity to retake the lead just three minutes on after Jaffar came off his life to make a challenge. But a shot from close range by the UAE’s Fabio de Lima was cleared at the very last second by Bahrain’s Ahmed Bughammar, setting the stage for Al Rumaihi’s goals.

The lanky striker scored his first in the 82nd minute off a rebound after UAE goalkeeper Khalid Essa stopped a Bughammar shot. He then fired in his second from close range in the 86th minute from the left of goal, after receiving a short pass from Marhoon.