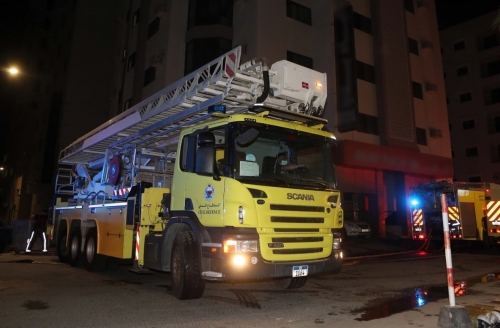 Residents of a high-rise apartment in Al-Hoora were evacuated yesterday after an early morning fire police say caused minor injuries to a person. The injured person was given first aid and necessary treatment by the medical team accompanying the ambulance service. Investigators are yet to determine the cause of the blaze.

Accidents like these are common in the Kingdom, where most of the workforce are staying in rented apartments. The last thing anyone wants to deal with is a fire in their home, yet in most cases, authorities say, negligence was determined to be root cause resulting in destruction and potential loss of life.

In a similar blaze in Ma’ameer in March, firefighters rescued a mother and her child from a fire broke out in their apartment. Another apartment fire reported from Muharraq in August, also occurred early morning, resulted in the death of a 63-year-old Bahraini. Police said a smoking sheesha left unattended with a portable stove to burn coals sparked the fire.

A 20-storey apartment in AlFateh, in January this year, was engulfed in a huge fire, investigators say was, caused by “negligence. Luckily none injured in the incident. Timely evacuation of the residence by Civil Defence officers averted a major disaster.

Faulty electrical equipment, clutter, careless storage of combustible materials, human error or negligence are the most common causes. Strictly following the fire prevention methods suggested by authorities would help reduce the risks and chance of fire.