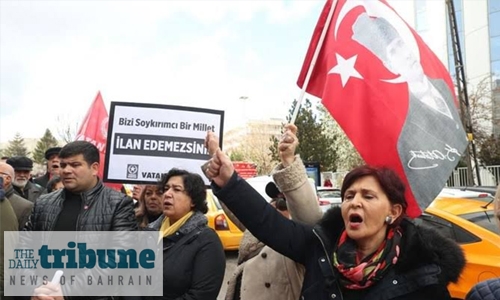 Turkey summoned the US ambassador on Friday after the US Senate voted to recognise the 1915 killings of Armenians as genocide. Deputy foreign minister Sedat Onal delivered the government’s reaction to envoy David Satterfield, said the foreign ministry, after Turkish officials warned that the vote endangered relations.

American senators followed the House of Representatives in voting to recognise the killings of Armenians during the First World War as genocide, for which the Ottoman Empire — the forerunner of modern-day Turkey — bore responsibility. Armenia claims 1.5 million died in the killings.

Turkey says the number of deaths was far lower and Turks also died, blaming the killings on the First World War. The US is now in line with 30 other countries in recognising Armenia’s claim of genocide. A US embassy spokesman in Ankara however told AFP that the Senate vote had not changed the administration’s position, pointing out that US President Donald Trump had stopped short of calling the killings genocide earlier this year.

The Congress resolution had been blocked several times by allies of Trump, who has sought a close relationship with NATO ally Turkey and President Recep Tayyip Erdogan. During a meeting in Washington last month, Trump said he was a “big fan” of Erdogan despite opposition from many in the Congress to the red-carpet welcome.