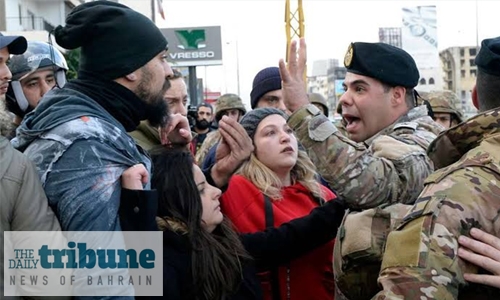 Lebanon’s Free Patriotic Movement will back a new government made up entirely of technocrats, but not with caretaker Prime Minister Saad Hariri at its head, its leader said, adding a further twist to a political crisis triggered by two months of anti-government protests. Caretaker Foreign Minister Gebran Bassil, who heads the Christian party founded by his fatherin-law, President Michel Aoun, outlined its position at a press conference on Thursday night.

“Should Hariri insist on the ‘nobody but me’ approach, and should Hizbollah and Amal Movement hold on to a technopolitical government led by Hariri, we have no interest in partaking in such a Cabinet as it is doomed to failure,” Mr Bassil was quoted as saying by Lebanon’s National News Agency.

“The solution is clear, which is the formation of an effective rescue government, a government of experts whose members and head are specialists capable of restoring people’s confidence, and who are backed by political forces and parliamentary blocs,” he said. Mr Bassil’s statement reverses his party’s earlier opposition to the protest movement’s call for established political leaders to make way for a government of technocrats.

The protesters have also said they will not accept Mr Hariri as returning prime minister. Mr Hariri resigned as prime minister on October 29 in response to the protesters’ demands. The protesters accuse the country’s politicians of corruption, failing deliver basic services and mismanaging the economy. Lebanon has been unable to access a US$11 billion assistance fund pledged last year because the government has been unable to implement the reforms demanded by donor countries.

Mr Hariri has supported the call for a government of technocrats but remains the most likely candidate to head one. The country’s top Sunni religious leader called Mr Hariri the preferred candidate, rejecting another proposed name.