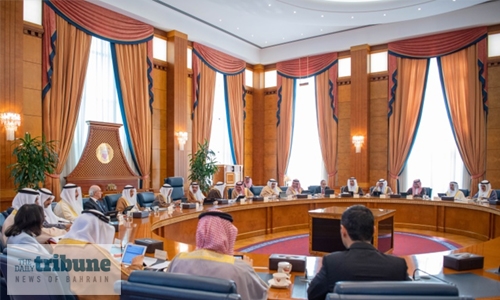 HRH the Crown Prince went on to highlight the importance of continuing to encourage entrepreneurship and innovation, both of which are key contributors of development, and congratulated the winners of the second edition of the GGC Pitch@Palace initiative, which took place last Wednesday under HRH the Crown Prince’s patronage. The Cabinet congratulated all Bahraini women on the occasion of Bahraini Women’s Day, celebrated on December 1st under the theme: “Bahraini women in the fields of higher education and future sciences.”

In this regard, the Cabinet highlighted the efforts of the Supreme Council for Women, chaired by HRH Princess Sabeeka bint Ibrahim Al Khalifa, the wife of HM the King and President of the Supreme Council for Women. The Cabinet noted the support provided by HRH Princess Sabeeka to the women of Bahrain as they continue to make advancements across various fields. The Cabinet remarked that Bahraini women remain an essential component to the Kingdom’s development, noting their leading role throughout the economy.

On the occasion of the centenary of the establishment of Bahrain Police, HRH the Crown Prince praised its key role in preserving the security of Bahrain and its people. His Royal Highness went on to thank every police officer for their sacrifices for the benefit and security of the Kingdom.  HRH the Crown Prince also praised the success of the employment fair organised by the Ministry of Labour and Social Development, inaugurated by the Deputy Prime Minister, Shaikh Khalid bin Abdulla Al Khalifa.

In this regard, the Minister of Labour and Social Development made a presentation to the Cabinet highlighting the wide participation of the private sector at the event as well as the impressive array of job opportunities offered during the fair, which reflect the strength of the national economy and its capacity to generate suitable opportunities for all citizens. The Cabinet approved projects to expand the electricity and water network, as part of the second phase of the Al Dur Power and Water Plant, at a cost of BD 615 million.

The Cabinet approved a memorandum submitted by the Ministry of Finance and National Economy, on the Ministry’s plan to implement the 2019–2022 Government Programme. The plan included details on the preparation of the national state budget in cooperation with the Kingdom’s ministries and authorities, bilateral agreements with various countries, as well as updates on the implementation of 36 initiatives of the third edition of the Government Priorities Framework.

In order to preserve the Kingdom’s ecosystem, wildlife and biodiversity, HRH the Crown Prince issued directives recognising Dive Bahrain as a marine protected area. The directives regulate oyster collection, fishing, recreational activities, scientific research and industrial activities such as the extraction of oil and gas.

BAE winners to be named today