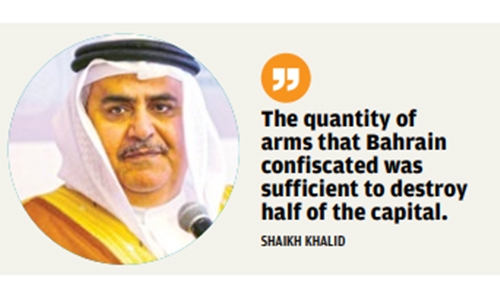 Foreign Minister Shaikh Khalid bin Ahmed Al Khalifa has said that the signing of a final agreement between the Yemeni government and the Southern Transitional Council (STC) under the auspices of Saudi Arabia would be a “major leap forward concerning the future stability of Yemen, particularly following the important meetings held in this regard in Jeddah”. In an interview with Asharq Al Awsat, Al Khalifa said, “Qatar is trying to prevent a solution in Yemen. We can see it through Doha’s positions announced in the media, broadcast by Al Jazeera channel.”

He explained that Qatar has always failed to enforce this role in Yemen facing the people’s will to stop all foreign interference, including Iran’s attempt to incite strife. The Bahrain FM said that Qatar is not only playing a negative role in Yemen, but also in Libya, Tunisia, Gulf States and Iraq. “Everyone knows what we mean,” he said. Commenting on weapons and explosive materials shipments from Tehran to Manama, Shaikh Khalid said, “The quantity of arms that Bahrain confiscated was sufficient to destroy half of the capital.”

He explained that Iran should send a message of peace and good neighbourliness or else, Tehran should be held responsible for its actions in the region. Shaikh Khalid said he considers the recent visit of Russian President Vladimir Putin to Saudi Arabia and the UAE as very important. “The visit shows that Riyadh and Abu Dhabi do not build relations with other countries governed by circumstances and that both states extend continuous bridges of friendship worldwide,” he said. Shaikh Khalid condemned the Turkish cross-border infiltration in north Syria, and he asked Ankara to respect the Syrian sovereignty and territories.

“The comeback of Syria to the arms of the Arab League is left to Syria and AL states,” he said, adding that the Bahraini diplomatic presence in Damascus had not stopped during the past years. Separately, Shaikh Khalid attended a reception ceremony held by the Bahraini-British Parliamentary Friendship Group in co-operation with the Embassy of Bahrain to the United Kingdom.

The reception ceremony took place in the House of Commons to mark the minister’s visit and the 12th Meeting of Bahrain-UK Joint Working Group In the presence of ministers, diplomats, MPs and media professionals, led by Secretary of State for the Middle East and North Africa at the UK Foreign Office, Dr Andrew Morrison, UK Minister of State for International Trade Connor Burns and UK Special Envoy for Freedom of Religion or Belief Rehman Chishti.

In his welcoming statement, the minister expressed his delight to attend the ceremony and meet with a large group Bahrain’s friends and took pride in the good ties that date back over 200 years, affirming the depth of relations between the two Kingdoms, based on joint work in all political, cultural and economic areas and on common interests to promote security and development in the region and the world at large.

For his part, the Chair of the Bahrain-UK Parliamentary Group Bob Stewart expressed appreciation to the Minister of Foreign Affairs for his presence, stressing the importance of the strategic relationship between the two countries.