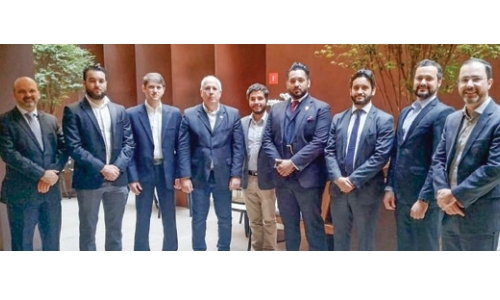 Brazil played hosts to a BRAVE Combat Federation event BRAVE 25, one of the biggest MMA shows held this year around the world. Bahrain officials took the opportunity to reaffirm their wishes to strengthen the links with Brazil in the fields of sports, tourism, and international business development.

A delegation from the Kingdom was in Belo Horizonte to discuss how KHK Holding, created by His Highness Shaikh Khaled bin Hamad Al Khalifa, could help support Brazil in the fields of sport and tourism. Headed by Mohammed Shahid, the delegation was in deep discussions with top officials from the Brazilian federal government, as well as senior members of Minas Gerais Governor Romeu Zuma’s team.

They shared their experience of transforming the landscape of mixed martial arts through KHK Sports, KHK MMA, and BRAVE Combat Federation, and received requests for further contacts to be made between the two parties.

Colonel Guedes, Chief Advisor for Federal Affairs, Estevão Fiuza, Chief of Staff of Governor Zuma were joined by Marcos Ferraz, vice president of BRAVE CF Brazil, as well as Leonardo Ananda, president of the Brazil-India chamber and they were all keen to learn more about how Bahrain can help Brazil further themselves in those fields, BRAVE said in a statement issued.