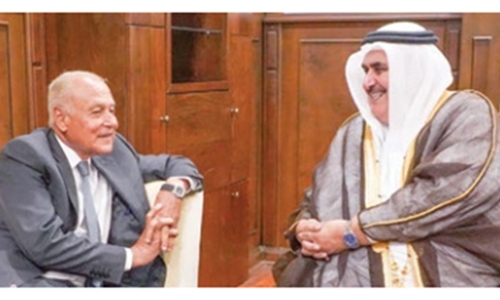 Egypt, Saudi Arabia, the United Arab Emirates and Bahrain – are expected to introduce a draft statement condemning Qatari media at a meeting of Arab League foreign ministers scheduled for today in Cairo, according to diplomatic sources. The 152nd session of the Arab League Council kicked off Sunday in Cairo at the level of permanent delegates.  An Arab diplomat who spoke to media on condition of anonymity said the four countries will introduce a statement “condemning Qatari media for broadcasting false information with the aim of misrepresenting Arab governments in order to sow confusion.”

The source said the draft statement was put forward by Egypt and was supported by the three other countries boycotting Qatar. Bahrain has been condemning the efforts of Qatari media, especially Al Jazeera channel to create rift within the Bahraini society. The Shura and Representatives Council issued a joint statement in which they denounced the continued failed attempts of the Qatari regime to meddle in the internal affairs of the Kingdom and disrupt Gulf relations.

The statement strongly criticised a documentary produced by Qatari-backed Al Jazeera Channel, which featured subjective and inaccurate claims aimed at creating rift and discord within the Bahraini society. The actions of the Qatari regime have proven to support the agenda of Iranian terrorism and hegemony ambitions across the region, the statement noted. The councils’ statement urged the Qatari regime to prioritise its efforts to resolve its internal affairs and deliver political and democratic reforms that fulfil the aspirations of its citizens.

In another development, Foreign Minister  Shaikh Khalid bin Ahmed bin Mohammed Al Khalifa, yesterday met with the Secretary-General of the Arab League, Ahmed Aboul Gheit, on the sidelines of the session. During the meeting, they reviewed the main topics on the agenda of the 152nd session. In addition to that, they also stressed the importance of continuing and intensifying the efforts aiming to enhance the joint Arab mechanisms for the benefit of the Arab countries and for the establishment of peace and security in the region.