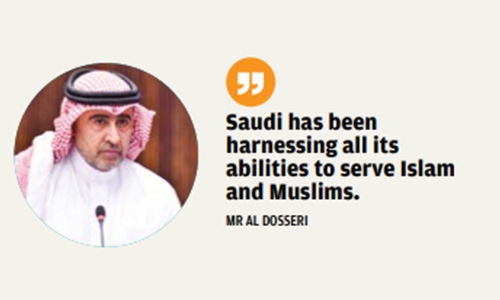 “To see our sisterly country Saudi harnessing all its possibilities and capabilities is a source of pride to us as GCC citizens,” MP Al Dossseri said, congratulating Saudi Arabia’s leadership on the successful organisation to the Hajj pilgrimages. “It’s a hard responsibility to welcome this huge number of guests in one place, but Saudi Arabia is making it seem like a simple task thanks to the tireless efforts being produced by those assigned to handle this duty,” he added.

Moreover, Al Dosseri valued the efforts of the Saudi Ambassador to the Kingdom Dr Abdullah Al Shaikh towards providing all the conveniences to the Bahraini pilgrims in order to make their journey an effortless one. “Saudi has been harnessing all its abilities to serve Islam and Muslims and its leadership has been working relentlessly to spread the real Islamic values across the whole world,” he explained, urging the Islamic world to join hands with Saudi Arabia in its noble efforts.

Invitation for non-Muslims to take part in Eid celebrations