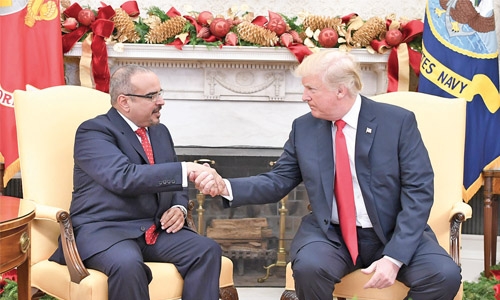 The meeting follows the signing of the extension of the US-Bahrain Defence Cooperation Agreement on Wednesday, signalling a new phase in the United States’ partnership in the region.

Reaffirming Bahrain’s commitment as a consistent and unwavering military partner to the United States and as host to the U.S. Navy’s Fifth Fleet, His Royal Highness spoke about the strength of defence relations between the two countries over the past 70 years.

President Trump and HRH Crown Prince discussed bilateral trade between the United States and Bahrain, underpinned by the US-Bahrain Free Trade Agreement, which supports job creation in both countries.

Both welcomed the trade deals worth $10 billion awarded to U.S. companies Boeing, Bechtel Engineering, General Electric and TechnipFMC. The agreements include the completion of a $3.4 billion contract for the supply of F-16s to the Bahrain Defence Force, to further strengthen defence capability of the Kingdom.

The President thanked His Royal Highness for the recent commercial agreements with Bahrain, which he said were greatly appreciated by the US and were a tribute to the relationship with the Kingdom.

HRH Crown Prince thanked President Trump for his recent visit to Saudi Arabia, where he gave a keynote address at the Arab Islamic American Summit.  The visit had demonstrated the United States’ commitment to regional and international security.

The President and the Crown Prince discussed ways in which the two countries can combat terrorism and violent extremism.

During discussions on international issues of shared concern, His Royal Highness welcomed President Trump’s firm position in holding Iran’s leadership to account.  The leaders emphasized the importance of countering Iran’s destabilizing activities throughout the region, including Bahrain.

President Trump asked His Royal Highness to extend his best wishes to His Majesty King Hamad.

His Royal Highness conveyed the greetings of His Majesty King Hamad to the President, wishing the United States every success under his leadership.

President Trump said he was honoured at hosting the Crown Prince at the White House and reaffirmed the long and excellent relationship between U.S. and Bahrain, which he said would only strengthen further as a great friend of the United States.