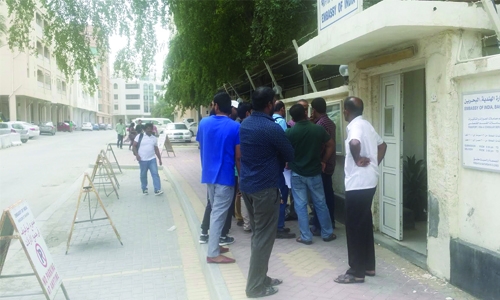 Manama : Around 15 expatriate workers, who had been coerced to work even without salary for the last six months, have been terminated from the employment, reports said on Friday.

They had been employed in a refinery in Hidd.

The workers, however, attended the ‘open house’ at the Indian Embassy here on Friday, held to address employee grievances.

They said they have been reported that the company had gone bankrupt and they were not able to pay
money.

“It was not fair on their part. Not only we had been terminated from work, we have not been paid also for the return ticket,” they complained.

As they have not been paid for the last several months they are on the edge of a breakdown, financially and psychologically, said one of them named Shiva.

He said the company was giving false hopes that they would be paid next month whenever they asked for their salary,
he said.

“We are totally broke. We do not have any money, and we are struggling each day to meet our expenses,” said Kumar, another employee of the group.

However, Indian ambassador Alok Kumar Sinha assured to look into the matter while he heard the complaints in the open house.

The embassy has given the necessary legal advices and asked to be in touch with the embassy, Kumar said.

The open house has also handled a case of an Indian worker who had lost his identity card (CPR) about two years ago.

Manikam Ramakrishnan, who lost the card, said some fraudsters managed to get a smart phone from a telecommunications company in his name after he lost the card.

He said he has been getting bills from the company for the use of their facility.

Although the company has been asking for payments, he said, he has not been paying it as he was not obliged to pay.

The embassy is, however, reported to be looking into the complaint.