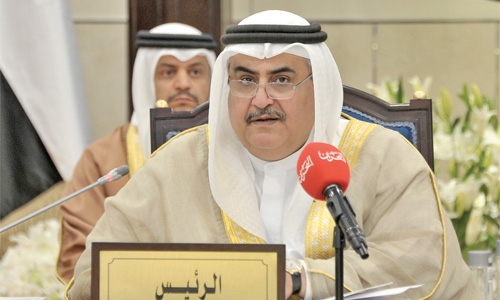 Manama : GCC countries will remain on their consistent and supportive position to protect the legitimacy of Yemen and for the restoration of peace

The statement was made during a meeting held by Shaikh Khalid with the Deputy Prime Minister and Minister of Foreign Affairs of Yemen, Dr Abdulmalik Al Mekhlafi to discuss the latest developments in Yemen.

Shaikh Khalid stated that the past period witnessed a serious and unprecedented development and encroachment by the coup militia in Yemen, with the launch of a ballistic missile toward Mecca.

He reiterated the condemnation of the despicable criminal act, stressing unity with Saudi Arabia in facing terrorism, and against anyone who tries to target religious holy places there.

The meeting discussed the agenda of the preparatory session, including the General-Secretariat
report on implementing the decisions of the Supreme Council and the Ministerial Council to reach comprehensive joint GCC action.

In his opening address, Shaikh Khalid welcomed the GCC Foreign Ministers, stressing that the meeting aims to review the topics presented by ministerial committees in its forthcoming session which includes various political, economic, security and other issues related to
GCC.

Shaikh Khalid expressed  confidence that the session will contribute in
identifying priorities and explore visions to reach a comprehensive view on the requirements for the next phase.

The latest regional and international developments, including the situation in Syria, Libya and Iraq as well as international efforts to combat terrorism was also reviewed by the Ministers.

The GCC ministers also met the Chairman of the Supreme Council’s Consultative Bureau of the session, Hamad bin Saud Al Sayari, and other bureau members.