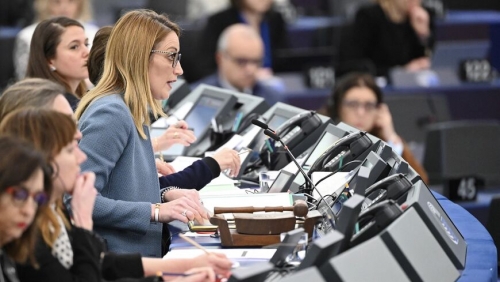 Iran yesterday warned the European Union it would take “reciprocal” measures after the European Parliament voted to list the Islamic Revolutionary Guard Corps as a terrorist group.

“The parliament is working to place elements of European countries’ armies on the terrorist list” of the Islamic republic, Foreign Minister Hossein Amir-Abdollahian said on Twitter. Members of the European Parliament voted on Wednesday to include the Guards on the 27-nation bloc’s terror list in “light of its terrorist activity, the repression of protesters and its supplying of drones to Russia.”

“The European Parliament shot itself in the foot,” Iran’s top diplomat said, adding that the response would be “reciprocal.” Later asked if Iran would consider withdrawing from the Non-Proliferation Treaty (NPT) or expel United Nations nuclear inspectors, Amir-Abdollahian said all options were on the table.

If European diplomats “who have no experience in diplomacy... do not correct their positions, every possibility is conceivable,” he was quoted as saying by state news agency IRNA. Iran has been a signatory to the NPT since 1970, the year it came into force, and has always denied it has any ambitions to acquire or manufacture an atomic bomb, despite some Western accusations.

Its nuclear program was a source of tensions with Western powers until a deal was reached in 2015, providing Iran sanctions relief in exchange for curbs on its nuclear activity. But the deal has been hanging by a thread since 2018 when the US unilaterally withdrew and reimposed biting sanctions, prompting Tehran to begin rolling back on its commitments.

Iran and world powers have been engaged in on-and-off talks to restore the deal, but discussions have been in deep freeze since last year. Iran’s parliament speaker Mohammad Bagher Ghalibaf also said yesterday that the legislature would “retaliate immediately and decisively” if the EU upholds and ratifies the European Parliament’s vote.