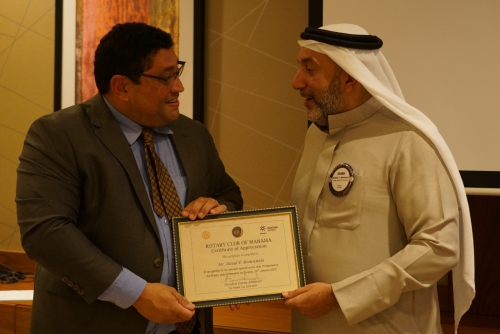 US Embassy Deputy Chief of Mission David P. Brownstein has stressed the importance of leadership, communication, empowerment, monitoring, and adjustment. At a meeting held by The Rotary Club of Manama yesterday at the Gulf Hotel, the volunteer charity organisation welcomed Brownstein, who spoke about a leader’s key role in an organisation.

“Communication is the most important aspect of leadership, and it is essential to work in teams rather than individually, delegate authority to the lowest level possible, sharing information, and soliciting a range of views and ideas from a diversity group of staff,” he said.

Brownstein emphasised that a leader has an obligation to set the goals and objectives of the organisation, and most importantly, inform a group regarding what should be achieved so the staff can rally around those objectives.

“We can all be leaders; it is about how you conduct yourself professionally,” Brownstein said. He discussed the importance of goals and objectives within any organisation, and to check milestones to ensure an organisation is on the right track.

Brownstein shared three calls to action from the Rotary including, creating projects to protect the environment, comfort the needy, fossilise the skills of the next generation, and most importantly, lead with fearlessness and kindness.

“The Rotary Club continues to create a culture that recognises and celebrates diversity. Having access to differing views and ideas is a positive sign, and even though we may differ on various aspects, that is a positive development overall,” said Brownstein.

He stated that it is essential to support communities, and to make a conscientious effort to pass our skills to the next generation. The Rotary Club of Manama President Osama Almoayed presented a Certificate of Appreciation to Brownstein in recognition of his valuable speech to the club. Brownstein began serving as Deputy Chief of Mission at US Embassy Manama in August 2022.

From October 2020 to October 2021, he served as the Senior Representative for Northeast Syria, prior to which he was the Office Director for Near Eastern Affairs within the Bureau of Conflict and Stabilization Operations.

In addition, he served as Deputy Chief of Mission and Charge d’ Affaires at US Embassy Bangui from 2017 to 2019, during which he led the embassy through widespread civil unrest, partial evacuation, and the negotiation of a comprehensive peace agreement amongst cultural conflictual parties in the Central African Republic.