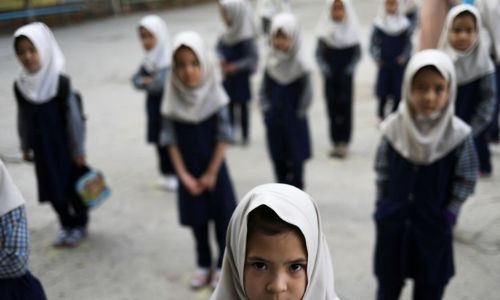 The Taliban on Saturday claimed that the closing of girls' schools above sixth grade was "temporary", adding that it was not a "permanent ban."

In an interview with CGTN TV, the spokesman of the Foreign Ministry, Abdul Qahar Balkhi said, "This suspension is a temporary suspension, and it is not a permanent ban, it has never been called a ban."

Defending the Taliban, he said that the strict views of most Afghan people on the issue of education and women caused the girls' schools to remain closed, reported Tolo News.

"There is a large percentage of society that has very strict ideas of what women can do and what they cannot do, and for that reason, the government is trying to take an approach that is gradual, it takes those people that do not understand some of the basic Islamic rights of Afghan citizens or of any human being, and the human rights, to try to convince them. It is due to lack of knowledge of that part of the society," he said.

Balkhi added that they are trying to solve this problem.

Meanwhile, girls who have been prevented from going to school for more than eleven months are asking the Taliban to reopen schools for them, reported Tolo News.

"When women are not allowed to see a non-mahram, then who should treat a woman when she gets sick?" asked Fariha, a student.

"It is very disappointing and we ask the Islamic Emirate to reopen our schools," said a student.

"If a government wants to have a progressive and developed society, there is no other way except with education and interaction with the community," said Waheeda Adalatjo, university lecturer.

It has been over 300 days since girls' schools have been closed, Kabul's officials have said that it depends upon the order of the leader of the Taliban.

The Taliban regime in Afghanistan has drawn heavy criticism across the world for a decree banning girls from school above grade sixth.

Meanwhile, the United Nations Assistance Mission in Afghanistan (UNAMA) report highlighted that women's rights have eroded in Afghanistan since the Taliban takeover.

The report stated that the erosion of women's rights has been one of the most notable aspects of the de facto administration to date. Before the Taliban came to power, women and girls had progressively had their rights to fully participate in education, the workplace and other aspects of public and daily life.