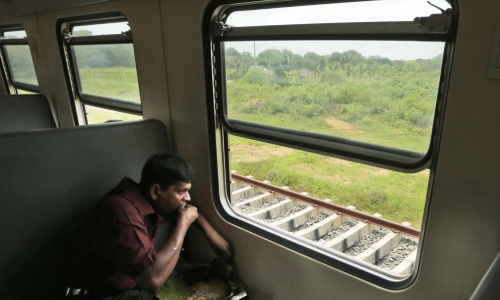 To minimize the impact of the ongoing fuel crisis on the common man, Transport and Highways Minister Bandula Gunawardena said that public transport will be restructured soon.

“The most appropriate step that can be taken as a public transport service is to reorganize and improve public transport, taking into account the need to meet the daily requirements of the home and obstacles that have befallen the education of children as well as the overall standard of living,” Colombo Page quoted Minister Bandula Gunawardena as saying.

He also said the railway system played an integral part when Sri Lanka transitioned from a self-sustainable economy to an export centric plantation economy.

The decision to restructure the public transport of the country was decided at the meeting held at the Sri Lanka Railways Headquarters where discussions were focused on giving special attention to resolving how the acute fuel crisis that Sri Lanka is currently facing should not impact the daily lives of the people, reported Colombo Page.

The discussion focused special attention on how the acute fuel crisis that Sri Lanka is currently facing has hurt the daily lives of the people.

According to the Minister, reorganizing and improving the public transport is the most appropriate step which can be taken as a public transport service. He also pointed out the need to meet the daily necessities of home alongside the obstacles which had befallen the education of children, and the overall standard of living in Sri Lanka reported to Colombo Page.

In addition, to resolve the fuel scarcity in the country, he said that the number of trains currently running should be increased significantly reported to Colombo Page.

He instructed the officials that they must take essential steps to implement this program with immediate efficacy.

The Minister also prioritized the need to prevent the inconvenience to passengers owing to the fuel crisis.

The General Manager of Sri Lanka Railways along with the Secretary to the Ministry of Transport also accompanied Gunawardena in the discussion, reported Colombo Page.

Sri Lanka is facing its worst economic crisis since independence with food and fuel shortages, soaring prices, and power cuts affecting a large number of the citizens, resulting in massive protests leading to the resignation of former Prime Minister Mahinda Rajapaksa and the appointment of Ranil Wickremesinghe as the new Prime Minister of Sri Lanka.