US home with four toilet seats in one bathroom goes on sale for $450,000; pic viral | THE DAILY TRIBUNE | KINGDOM OF BAHRAIN 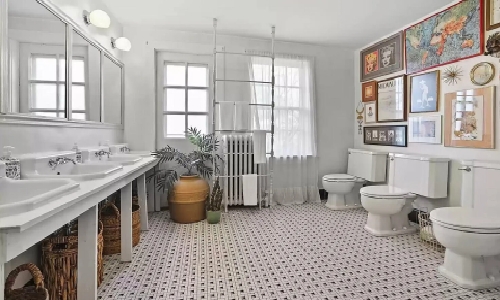 A bizarre home that has a four-toilet bathroom is on the market for $450,000.

The home's unique selling point is a bathroom that has not one or two or three but four toilets.

The toilets are not even separated by stalls but are rather lined up side-by-side, mere inches apart.

The bathroom also has four sinks on the opposite wall.

Interestingly, other bathrooms in the house seem to be normal, with one toilet each.

The listing by Mahler Sotheby's International Realty says, "This stately Milwaukee home was the first ever built on Hawthorne Ave, by the Fowle family in 1851.

The home is rich with history and charm that has been maintained throughout even as modern touches have been added."

The listing adds, "Spacious rooms are warmed by hardwood floors and beamed ceilings and the living areas extend onto the large screened porch and covered patio below."

Most of the interior of the house has been restored.

The kitchens and bathrooms got major updates such as new plumbing, electrical, fixtures, appliances, etc.

In addition to the main house, there is a complete apartment in the rear, which is suitable for an in-law suite or separate rental.

Realtor Jane Dichristopher of Mahler Sotheby’s International Realty told WTRF that when the house was built, it didn't have a four-toilet bathroom.

Photos of the house are doing rounds on social media.

Netizens took to the comments section to share their thoughts.

One user joked, "My toddler who won’t leave me alone designed this bathroom."

Another wrote, "For those families that are inseparable I guess."

A third user quipped, "I am surprised they do not have name plaques on the toilets, my kids would insist on that."

Yet another added, "I know the issue is the amount toilets but why is there so much stuff on the wall?! WHY IS THERE A MAP?"

What do you think about the bizarre house with the four-toilet bathroom?