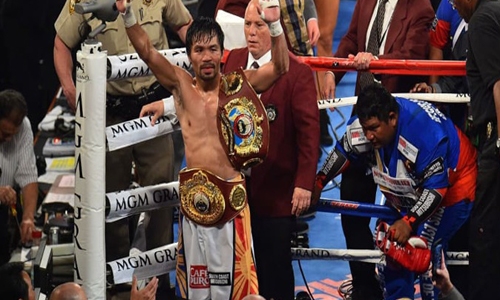 Global boxing icon Manny Pacquiao threw his hat into the ring on Sunday to run for president of the Philippines in next year's elections.

Pacquiao, who is a member of the Philippines senate for the ruling PDP-Laban party, promised he would rule with "integrity, compassion and transparency.", reports dpa.

"I am a fighter and I will always be a fighter inside and outside the ring," he said, addressing supporters and allies at the PDP-Laban party conference on Sunday.

"In my entire life, I have never backed down from a fight as I stand firm in the name of principle and honour of the country," added the 42-year-old eight-division boxing champion.

Pacquiao announced his bid more than one week after a rival faction of PDP-Laban endorsed Senator Christopher Go as their presidential candidate, with current President Rodrigo Duterte as its choice for vice president.